Lack of versatility not a concern for Ulster’s specialist outhalf 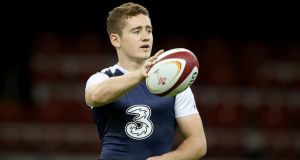 Paddy Jackson: “I just have to focus on playing 10, getting my roles right and trying manage the team around me.”

In a rugby world of utility players Paddy Jackson is content to stand proud as a specialist. Ask a number eight where he plays and it’s everywhere in the backrow. Every centre and fullback is a winger. Locks will have a go at blindside. Players quickly learn to be ubiquitous under Joe Schmidt. Not Jackson.

The Ulster outhalf has remained steadfast in his thinking that if Leinster’s Ian Madigan is his competitor for a position in Joe Schmidt’s 31 World Cup players, it is at pivot.

It’s encouraging to hear that Jackson is borrowing from Madigan in talking about his own confidence - entirely different to arrogance.

Jackson has in the past been modestly reflective on his ability. His voice now is louder and just as Schmidt demands from his players Jackson, with some belief has begun to publicly put pressure on his own strengths.

There is little reason to believe he’s not the second choice at 10, when Johnny Sexton is available. He hasn’t been told any different. This weekend may get another chance to show it.

“That was the case a few years ago,” he says of being back up to Sexton. “I’d say if I’m playing at the top of my game there’s no reason why I wouldn’t be on the bench or even getting in there on the team. For myself and Ian it’s a bit out of our hands.

“For me it’s more specialised to 10. I’ve been focusing on outhalf. I think it’s good for Ian to have (the ability to play centre). It means he has a better chance of being on the bench, having that utility and a bit of a wider range of positions.

“It can be a strength or a weakness. If I’m trying to make the squad, it could work against me. I just have to focus on playing 10, getting my roles right and trying manage the team around me.”

He may not look demonstrative or expressive on the pitch. But Jackson has a dry humour that his dead pan delivery sometimes requires a double take, although, you may wonder if it cuts a number of ways.

“We’ve been working together for a few years now so we’re used to each other,” he says of Sexton. “Johnny is a legend and he’s always helping us.

“I like to try and build his confidence up and then sometimes during the night, I like to get up at three in the morning and play soothing music into his room to tell him I’m coming for him.”

There’s a sense too that there’s an edge to Jackson, more off the bridle than usual. He was disappointed at not getting more pitch time last week after 80 minutes in the first game against Scotland. But it doesn’t distract him from his main task in rugby, which is to not just rebut Madigan but put exert pressure on, threaten and discomfort Sexton.

“Definitely. I’ve been around for a few years now, so I’m looking to push for a spot,” he says. “I’ll be looking to get my foot in there. Any chance I’ve got I’ve tried to do as well as I can. Hopefully I’ll get a run-out before the pre-season games are over.

“Yeah, I was disappointed that I didn’t get too much game time last week but hopefully if I am involved, I get a bit of game time. Like I said earlier that’s what I’m trying to do; get out on the pitch and show what I can do.”

Ireland expect a different Wales to show up in Dublin this Saturday and with Warren Gatland showing a traditional vein of the cold ruthlessness that kept Brian O’Driscoll from a winning Lion’s squad in the final Test last time out against Australia, so too he has dispensed with Mike Philips, Richard Hibbard and James Hook.

Few underestimate the Kiwi. His run is always for the finish line, not to win the first lap. There’s not a person in the rugby world unaware of that strength to his personality.

“We had probably done a good bit more rugby than they had,” says Jackson of Ireland’s facile win in Cardiff. “They’re having a different pre-season and were at a different stage of their pre-season.

“For us, we were focused. We’d been looking forward to that game for a good few weeks and had the ball in hand a lot. I don’t know if they had done much rugby, I think it was a lot more fitness and conditioning. So it’ll definitely be a different team this week.”