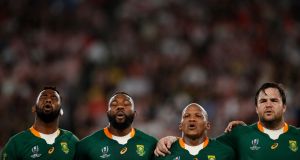 Bongi Mbonambi believes South Africa’s rapid rise under Rassie Erasmus from laughing stock to World Cup contenders is down to the coach’s willingness to pick players on form and not be swayed by loyalty or colour.

The Springboks will reach their third World Cup final if they defeat Wales in Yokohama on Sunday, two years after an abject defeat in Cardiff prompted the South African Union to make Erasmus, who had just returned from Munster, the national side’s head coach on top of his job as director of rugby.

“Rassie has made a massive difference,” said Mbonambi, who ousted Malcolm Marx, widely regarded as one of the best hookers in the world, from South Africa’s starting lineup this tournament and was one of seven non-white players in the team that faced Japan on Sunday.

“That difference has not just been to the South Africa team, because his decisions have affected the whole nation. He is a coach who has an honest opinion about every player and he is not someone who does things behind closed doors but he does it openly and everyone knows about it.

“Players have respect for someone who is honest and open and says what he is looking for. It gives you more freedom to go out there and express yourself: he does not put you in a box and that has been one of his outstanding features.”

Asked whether one of Erasmus’s decisions that impacted on the nation was the appointment of Siya Kolisi as captain, the first black player to be given the post in a Test, Mbonambi replied: “Not just that. I know that if I say something the media will turn it around and put it in a different way.

“To me, what this team is about is that your skin colour does not matter, or where you come from. Rassie will pick a guy who is there to work hard and do his job well. When you compare him to previous coaches, they would pick someone who had been there for years even though he was not pulling his weight. Now you get picked by the work that you do and how you execute it.”

Mbonambi left the field before the end of the first-half in the 26-3 victory over Japan after feeling a slight hamstring pull, but he declared himself fit to face Wales and South Africa’s forwards coach Matt Proudfoot said they had a full squad of players to pick from.

“It is a good position to be in ahead of a fixture against a very good Wales side,” he said. “They are not Grand Slam champions for nothing and they were top of the world rankings for a while this year. We have the highest respect: they have an outstanding defence and pack of forwards and dangerous backs.

“It has been said that they were poor against France in the quarter-final, but I disagree. They came from behind to defeat a very good side and that says everything about what we will be facing. We are pleased with the way we played in the second-half against Japan, but there is still work to do if we are to get to the final.”

South Africa, who will face Wales in the third successive tournament, reached the semi-final in 2015 when they were narrowly beaten by the All Blacks but fell apart in the two years afterwards to the point where they lost to Italy and were hammered by Ireland and the All Blacks, looking anything but potential World Cup winners.

“Rassie came in with a specific plan and we have gone back to the way South Africa used to play,” said Proudfoot. “The biggest change has been the mindset he has created throughout the group. Everyone has been empowered to take ownership of their roles and there is confidence now.” - Guardian