There was a lot to like about Ireland’s display, which bodes well for the future 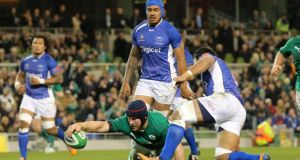 Seán O’Brien scores Ireland’s second try against Samoa at the Aviva on Saturday in what was yet another powerhouse performance from the openside flanker. Photograph: James Crombie/Inpho

His technique in this area has developed as has his physique. It is no coincidence that the best operators at the breakdown are of a certain stature: Brian O’Driscoll, Gordon D’Arcy and such ground hogs as Australian giants George Smith and Phillip Waugh.

O’Brien is slightly taller but has the lines of entry, low centre of gravity and power to get into positions early and for long enough to gain great turnovers. Take Rory Best, another brilliant man on the deck but less able to last in the evolving ruck as the weight of opposition arrive to “can-open” him. O’Brien has the raw strength to step up in the middle of the ruck never lifting his head while crabbing along (legally) over the ball possessed of a teak-tough momentum.

Clearly O’Brien is the best openside we have but against the All Blacks we may need to sacrifice his number-seven role to get him wider around the park where he received his first real pass from Conor Murray on 45min 50sec. He ran hard, flat and wider than usual to test three tackles and score. Yes he was in the number-seven role, managing all the other aspects but six would free him further.

Lineout expertise
The second-row partnership of Paul O’Connell and Devon Toner could make for a potentially interesting backrow selection. Their height and lineout ability reduce the need for a lineout specialist at number six. Hence O’Brien could play in that role with Chris Henry dedicated to the core openside roles.

Ireland’s first lineout on 16min 15sec was predictably thrown to Toner who caught and gave. For Peter O’Mahony’s try referee Steve Walsh had awarded his second penalty to Ireland from the scrum. Paddy Jackson gained three points from the first, but for the second Jackson went down the line.

Henry went into temporary scrumhalf as Murray stepped back into midfield. Again Toner was the target. Due to the accuracy of Best’s throw and Toner’s stature it was a simple old-fashioned lineout – one step back and up.

Henry filled in on the ball and with the Samoans unable to organise themselves Ireland powered 19m for O’Mahony to touch down.

Ireland’s set piece play was especially impressive, with an extremely honest scrummager Jack McGrath at lose head rewarded by Walsh for staying square, binding tight and ultimately placing too much power on replacement James Johnston, ditto Mike Ross. In an afternoon where precision was shared with sloppiness, the set piece was crucial.

Powerhouse O’Connell
When O’Connell arrived the power, energy and enterprise was very obvious but he was extremely potent behind the tight head. Over recent times he has been, like Toner, behind the loose head. But in accommodating Toner he applied huge effort on the right-hand side. The scrum led to Ireland’s crucial scores.

With such little preperation time Samoa’s inability to compete in set pieces is an indication of their capacity to challenge at this level. On the flip side it is an indication of the quality of work being done by Ireland; in the middle of this new philosophy the basics are crucial. Clearly these principles will be under far greater pressure in coming weeks.

What was extremely clear as the game unfolded was coach Joel Schmidt’s attacking intention. No doubt we’ve seen but a smidgen of what is on offer but one thing was very clear: there is intent to attack from inside Irelands own 22m line – a full 80m from the opposition try line. Countless examples come to mind: when Samoan outhalf Tusi Pisi hit the right-hand post from a sloppy breakdown penalty the response was telling.

Toner was first to react in fielding the ball where he was not content to truck it up, he found Fergus McFadden on the left wing. While still inside their 22 they transferred the ball from the left touchline across to the right where O’Mahony was waiting and bumped Samoans before going down town.

Ireland’s fringe defence off breakdowns was very impressive, especially considering the threat from Samoan scrumhalf Kahn Fotuali’I who was continually tempting the Irish fatties to step up out of line with Samoans running hard lines into holes that ultimately never opened. Chris Henry, ably supported by Toner, was especially effective in linking his forwards to his backs in defence. Off quick ruck ball Fotuali’I would slide across the fringe begging the Irish to tackle him in a ruse that never materialised; excellent work.

Impressively, both Murray and Jackson employed a well-timed kicking game – especially off quick turnover ball as Samoa’s back three were invariably out of position and forced to scramble back such was Jackson’s kick from Rory Best’s great turnover that led to O’Brien’s try.

Playing in packs
There was also intent to create numerical mismatches such as when Eoin Reddan fed the scrum and ran right to suck sub scrumhalf Jeremy Su’a open before a rewind to Jackson who hit D’Arcy who converted the 2 v 1 putting McFadden over. A solid scrum, a feign openside, an attack on the blind side rewind and a conversion of 3 v 2; excellent. In fact McFadden had many decoy runs to occupy Samoa with the Irish filling the field when sliding across and creating much-needed variety in attack. More please!