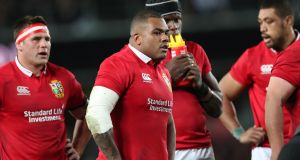 Kyle Sinckler has apologised after he was arrested on a night out following the Lions’ 15-15 draw with the All Blacks in Auckland. Photograph: Billy stickland/Inpho

British and Irish Lions prop Kyle Sinckler has apologised for “any inconvenience caused” after he was arrested during a night out in Auckland at the weekend.

Auckland police confirmed that a man was placed under arrest but not charged following an incident involving “minor disorder” in the early hours of Sunday morning.

According to reports, the incident occurred while Sinckler was out in central Auckland in the wake of the Lions’ 15-15 draw with New Zealand in the third and final Test at Eden Park on Saturday night, a result that saw the series finish 1-1.

Lions tour manager John Spencer confirmed that the 24-year-old Harlequins prop had apologised and been reminded of his responsibilities.

Spencer said in a statement: “We have been informed by Auckland police about an incident involving Kyle.

“I have spoken to Kyle and reminded him of his responsibilities as a Lion, which extend to his off the field behaviour.

“Kyle has apologised for any inconvenience caused and we are satisfied that he regrets this incident and that this is the end of the matter.”

Sinckler, who started two tour matches and appeared off the bench in all three Tests against the All Blacks, said: “I apologise for putting myself and the Lions in this position and also to the police and anyone else affected.”

“A male was placed under arrest but was not charged after further inquiries established that the incident did not warrant prosecution.

“He was then taken to his accommodation by police.