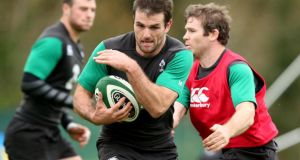 Jared Payne: “I’m pretty passionate about it, seeing the environment Ireland have created over the last three years. It is something I want to be a part of.” Photo: Dan Sheridan/Inpho

That was put to Joe Schmidt yesterday: has his optimism been tempered by so many injuries and the Springboks’ newly-evolved versatility?

“Optimism doesn’t feature too much for me, realism does,” says Schmidt.

Some reality then: Gordon D’Arcy couldn’t train last week so the coach went with his instinct. Marching outside the predictable box, the pragmatic coach opted to fully utilise the five pitch sessions available to Ireland.

Fit players were rewarded. That meant Payne ran at 13 with big Robbie Henshaw holding the inside channel. D’Arcy and Brian O’Driscoll they are not, nor ever will be, but that time has passed.

Payne is an accomplished fullback, former Ireland centres O’Driscoll and Maurice Field have said so, but needs must.

He was recruited by David Humphreys three years ago after a circuitous Super Rugby career saw him hired as the Chiefs’ medical joker in 2007 before demotion to National Provincial rugby with Northland in 2008.

There followed two seasons patrolling the mighty Crusaders back field before the Blues liked the look of him at centre.

Stephen Donald’s World Cup heroics in 2011 made the dream of representing the All Blacks even more tangible to New Zealand males.

Around that time Payne’s window of opportunity opened only to fade from view just as quickly.

Humphreys came to visit soon after, offering an opportunity to fill the 13 jersey for Ireland by November 2014. There was a catch; he would wear 15 for Ulster until that time came.

“I had to make a pretty tough decision when Ulster asked me to come over. I had a few conversations with [the All Black] coaches now and then. They would do their laps, like the Irish coaches do around the provinces, talk to you a bit.

“I had to make my bed. I always wanted to do a bit of travelling. I’m pretty passionate about it, seeing the environment Ireland have created over the last three years. It is something I want to be a part of.”

“Originally we are from Tauranga, a little place over the Bay of Plenty. Nice little beach town.”

It looks glorious; two strips of sand and a year round swell for surfers.

“I kept it [getting selected for Ireland] pretty quiet,” Payne continues. “Told my mum and dad, who were over the moon, but I’m starting to get a few texts now.”

But that catch still lingers.

Stuart Barnes recently made the comparison of Payne to former New Zealand coach John Hart hand-cuffing Christian Cullen’s magical attacking ability when moving him to centre at the 1999 World Cup.

Are we, the media which includes O’Driscoll and Field, making too much of a fuss about this?

But, to be clear, he is playing outside centre tomorrow.

Ever played inside centre?

“I think I might have filled in there once or twice, maybe, nothing serious.”

He adds: “Yeah look, rugby is played by a team, isn’t it so you don’t want to leave your inside or outside mate hanging.

“We’ve got to defend well as a unit, be that holding them tighter there or pushing up on them. Whatever we do, we have shut them down as a collective rather than individually.”

Still, the crowd could do with Henshaw or Payne bursting out of the line tomorrow, risking it all just to burst Jean De Villiers or Duane Vermeulen or Tendai ‘Beast’ Mtawarira.

The pinnacle of his Ulster sojourn was supposed to be last season’s European campaign but four minutes into the quarter-final against Saracens at Ravenhill he was sent off for charging into a mid-air Alex Goode.

That call still looks harsh. His eyes were on the ball until it was too late. It killed Ulster’s season.

Tomorrow he’s a kid from Tauranga, over the Bay of Plenty, staring down the Springboks. The dream for any Kiwi really.