Much more to the Springboks than ‘heads down, bums up, straight ahead’ 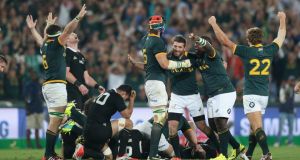 A nation’s rugby teams is at its most potent when it performs with the style of play and mindset that personify the character of its people. Like Africa itself, the current Springboks now play with an unpredictable, raw power.

In past generations the Boks’ attack has been as predictable as day turns to night.

Heyneke Meyer has added flair to Springbok rugby and it is a masterstroke.

In a game inhabited by big men, the South Africans are the biggest of the big. Not only are they huge athletic specimens, they are frighteningly aggressive. They base their entire game on physical domination. The Boks are relentless in their go-forward.

That is new to the Springboks.

There are only three ways of taking the ball forward in rugby. Running, kicking and mauling. This South African side will run it from deep and they will run it at you close, with their giant forwards. Their halves can pin you deep in your own territory with an accurate kicking game. However, it is the Boks’ powerful maul, aligned to their lineout dominance, that may yet prove to be the undoing of Ireland.

The results of their last two games speak for themselves. Three tries in that epic victory over New Zealand and four tries in defeating Australia – this team is capable of high-quality attack.

In both of these fixtures they have retained over 96 per cent of their own ruck ball. They are accurate, patient and powerful at the breakdown. They also kicked less often in general play than either New Zealand or Australia.

Like all great attacking teams, the South African attack is based on defence. Get your defence right and attacking is much easier.

The South African system of defending is wonderfully basic.

They have huge men standing close together. They sprint at the ball carrier, denying him both time and space. Two or three of them then hit the ball carrier behind the gain line, with exceptional aggression, and basically belt the living day lights out of him.

And guess what? It is highly effective.

The South Africans will offer the attackers space out wide and leave large parts of their flanks with no defenders. When the attacking team stands deep and attempt the three passes required, to get the ball to the empty space, the Boks pounce with lethal intent and kill the attack metres behind the gain line.

They do leave space for an accurate kicker, like Sexton, to turn them around. However, one poor kick and the Boks will counter attack and punish you.

What a joy it is to watch the great Victor Matfield and his talented young partner, Eben Etzebeth, move with such agility, precision and tactical understanding in the lineout

Ireland will have to be accurate with their lineout, as Matfield is the best defensive lineout player I have ever seen. The fact that Paul O’Connell is a very close second makes the lineout contest one to truly savour. Two all-time great players, trying to outplan, outthink and outperform the other. A magic moment for all us rugby geeks.

As you would expect the South African scrum will test Ireland to its core. With no Cian Healy or Rory Best, I fear Sexton and his backline will not see much clean set-play ball.

This is a mature, experienced and a powerful group of players, coming onto the field late in the game. This bench hits the game with energy, pace and a physical confrontation that wins matches against tiring opponents. If you don’t believe me, watch the last 20 minutes in Capetown, when the Boks bench tore the Wallabies asunder.

Not even the Kiwis have three World Cup winners on their bench.

To state the obvious, this Springbok team is pretty good.

With a long list of Irish injuries and seven months between games, the odds are highly stacked against Ireland. The South Africans, hardened by the success from tough international competition, should win.

If the home side walk off the Aviva victorious, it should rightly be regarded as one of Ireland’s great victories against one of rugby’s true giants.