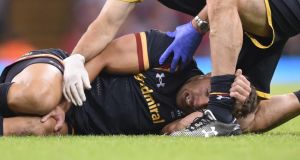 Wales’ Rhys Webb has been ruled out of the Rugby World Cup. Photograph: PA

Mike Phillips has been called up to the Wales squad after the scrum-half Rhys Webb was officially ruled out of the Rugby World Cup.

Webb, last season’s Welsh player of the year, suffered a foot injury during the 23-19 World Cup warm-up victory over Italy in Cardiff on Saturday and the Welsh Rugby Union confirmed: “Rhys Webb has been ruled out of the Rugby World Cup with foot injury. Further examination on foot and knee to come.”

It added: “Rhys will undergo further examination and assessments on both his foot and knee before further details can be announced.”

Phillips of Racing Métro is now likely to add to his 94 Welsh caps given the inexperience of the two other scrum-halves in the party, Gareth Davies and Lloyd Williams.

The wing Eli Walker, who made his international debut against Ireland last month, has also been called up following the inevitable confirmation that Leigh Halfpenny will miss the World Cup with an anterior cruciate ligament injury to his right knee.

The Wales head coach Warren Gatland said: “It is extremely disappointing for both Leigh and Rhys. They have worked exceptionally hard to establish themselves on the world stage and to prepare for the tournament and we wish them all the best with their recovery.

“After announcing the squad we spoke about the need for players to remain ready for action and is a great opportunity for Mike and Eli. It’s great that we can call on players of this calibre. To bring Mike’s experience into the squad is a bonus along with Eli’s exciting talent.”

Phillips had been one of three Lions dropped from the squad by Gatland in August, the others being James Hook and Richard Hibbard, despite being a key figure in Wales’s 2013 Six Nations title success.

Webb issued a statement that said: “Really disappointed to be ruled out of the RWC. After all the hard work I’ve put in over the summer words can’t describe how I’m feeling.

“I really believe that Wales can go on and create something special. I appreciate all the messages.

“It’s great to have so much support from all around the world but let’s get behind the boys. See you in 2016.”

Wales start their World Cup campaign against Uruguay in Cardiff on 20 September and also line up against the tournament hosts England, Australia and Fiji in Pool A.