Bledisloe Cup stays in New Zealand after victory in Wellington 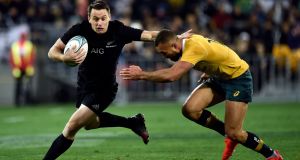 The malaise that blighted Australia’s top rugby players throughout Super Rugby has now well and truly ensconced itself in the national team following their sixth successive defeat in their Rugby Championship loss to the All Blacks on Saturday.

Michael Cheika’s side were beaten 29-9 at Wellington Regional Stadium and while they were more combative than in the 42-8 loss the previous week, the niggly, negative tactics earned little respect from rugby fans or their local media.

Cheika attempted to divert attention from the loss, and style of play, by criticising referee Romain Poite and suggesting All Blacks prop Owen Franks had been guilty of eye gouging.

In reality, however, the Wallabies were again simply outplayed with their game plan designed to minimise the damage and prevent another thrashing in a match that doubled as part of the Bledisloe Cup series between the two sides.

To that extent the tactics worked, though it really only papered over some worrying cracks that are signs of deeper issues within Australian rugby as they fight for relevance in a crowded sporting marketplace.

While those issues will need a more strategic view, it will be interesting to see if the Wallabies can at least fix some of their on-field problems in time for their next match against the Springboks in Brisbane on September 10th.

The Wallabies’ set piece has fallen apart in the last two weeks. They lost four lineouts on their own throw on Saturday and did not get enough clean ball to attack with from lineouts they did win.

All Blacks hooker Dane Coles also suggested the visitors were not interested in scrummaging, instead preferring to try to milk penalties from Poite.

What the immensely strong set pieces from South Africa and Argentina make of that observation will be interesting to watch as the Rugby Championship progresses.

Player depth continues to be a major issue for the two-time world champions and injuries have only highlighted their glaringly inadequate international playing stocks.

Three immensely creative players who could spark something at inside centre – Kurtley Beale, Matt Giteau and Matt Toomua – are among those who are out injured.

First choice flyhalf Bernard Foley, so instrumental in their run to the World Cup final last year, sat too deep last week in Sydney and has kicked poorly in both games.

The gamble of recalling enigmatic flyhalf Quade Cooper, who looked vulnerable and indecisive in all of his previous 10 matches against the world champions, failed to pay dividends.

Cooper again struggled with the speed and intensity of the All Blacks defenders and rarely appeared at first receiver.

The unpredictability of his game, which could tear teams apart when he was at his best, has also largely disappeared since he suffered a bad knee injury at the 2011 World Cup.

Instead of challenging defenders or trying to create any doubt in the line, his default reaction is to shovel the ball on, which creates issues in the midfield as players get cramped or forced across field.

Despite those issues, Cheika said he felt he had seen enough from Cooper and Foley on Saturday to consider sticking with the partnership in the future, though what he does in the number 13 jersey is another issue.

Centres Tevita Kuridrani and Samu Kerevi, whose selections have been based on their ability to get beyond the gain line, have consistently failed to do so and been error prone.

One positive for the Wallabies continues to be the ball-pilfering abilities of their loose forward trio, though Michael Hooper’s previously under the radar, off-the-ball cheap shots were noticed on Saturday.

The only other is the sense of danger whenever fullback Israel Folau, who has said he wants to play in the midfield, gets his hands on the ball.

The issue is whether the rest of the side can give him enough of it to make a difference.