Matt Williams: New Zealand still the best, but not by much

New Zealand are team in decline, while Springboks are sleeping giants of tournament 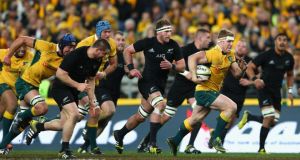 In past World Cups, the northern hemisphere countries have rightfully feared the ‘marauding hordes’ from the south. Apart from England in 2003, all other winners of the William Webb Ellis Trophy have come from the south. In the past the divide between north and south has been more like an ocean than a stream.

That was the past.

New Zealand are favourites and, make no mistake, they are very good – but not unbeatable. Australia proved that last month. And let’s not mince words. New Zealand are not immune to choking when it comes to World Cups. They even choked in the final at Eden Park four years ago and if referee Craig Joubert had awarded France the penalties that many felt they deserved, Les Blues would have won. It is wonderful for the rest of the rugby world to know that the Kiwis finally have a weakness.

The pressure from the New Zealand public on their rugby team is staggering. It is not just an obsession, it borders on pathological. When the Wallabies defeated New Zealand in Sydney this year, several of my Kiwi friends literally flew into rages. I have witnessed this reaction from Kiwis more and more over the years. New Zealanders take so much of their identity as a people from the performance of the their rugby team that the resulting pressure has a negative effect on the team.

Richie McCaw and Dan Carter are icons of the game. All-time greats, magnificent roles models and true champions. They are also ageing. Both are still playing fine rugby, but their brilliance is fading. New Zealand made uncharacteristic errors in losing to Australia in Sydney. They lost the game due to errors that older players make.

New Zealand are trying to play the game at a pace that is breathtaking. I have never seen rugby played with such rapid, accurate and determined ball movement. The players are superbly conditioned and have been trimmed down by several kilos to allow them to carry their bulk for longer periods at a higher tempo.

New Zealand are still the best, but not by much. They are past the peak of their cycle as a team and are in decline. Just how far down that decline remains to seen. Oh, and they are also never to be referred to as All Blacks. That only encourages them.

The Springboks are a different species altogether. Big, fast, tough and, according to the ANC, with way too many white guys to be a true reflection of South Africa.

Any discrimination based on the colour of a players skin for selection is wrong and should be admonished. Black or white.

While all selections are debatable, I am told by knowledgeable South African rugby observers that this Springbok team is a selection based on performance and talent, not race.

If this Springbok team is left untroubled by outside political influences, they are the sleeping giants of the tournament. A team of immense physical power, the stop-start nature of modern refereeing – especially from the officials of the north – will favour their confrontational style of play.

The South Africans dominated Australia, yet fell just short at the final bell. They then lost at home to the greatly improved Pumas.

Competing in the southern hemisphere Rugby Championship, the Argentines now play New Zealand, South Africa and Australia twice a year. Two things have happened to the Pumas. Their world ranking dropped and their knowledge, understanding and performance in Test matches improved. The championship has been tough love for the Pumas.

The Pumas are not going to win this World Cup, but they are going to make some teams pay a very high price if, like South Africa, they take them lightly.

Despite these real issues, Cheika has brought together 15 quality players. After the top 15, the Australian talent thins alarmingly. Success for the Wallabies will depend on keeping their best XV on the field, especially backrowers Michael Hooper and David Pocock.

While the Australian back line is fast and proficient, it is the massive improvement in the Australian scrum that has ensured parity with South Africa and New Zealand.

In the past Australia have often looked to Argentinian scrum coaches for help. Enrique ‘Topo’ Rodríguez and Patricio Noriega have previously attempted to remedy the ills of the poor scrummaging culture in Australia and failed.

Success has finally arrived with the appointment of Mario Ledesma, who worked with Cheika at Stade Francais.

The Wallaby scrum has been at worst solid and at times destructive. Two words rarely used to describe Australian scrummaging.

While the teams from the championship are all high quality, the gulf between the north and the south has been bridged. There are two realities at play. On any given day Ireland and England are capable of defeating the Springboks, the Pumas and the Wallabies.

And New Zealand have every chance on tripping on their bootlaces and failing at a World Cup once again.

Please let it be so.