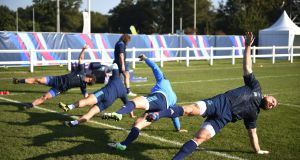 After the second World War, tens of thousands of Italians scrambled onto overcrowded ships, carrying nothing but the desire for a peaceful life, far away from the ruins of European fascism. Many traveled halfway across the world to Anglo-Celtic Sydney.

These emigrants worked exceptionally hard to establish their families in a foreign society. Gradually they opened the very bland tastes of 1950s Australia to the Italian cultural delights of food, coffee, gelato, pastry and wine.

I live in the beautiful inner west of Sydney, where a gastronomical and cultural slice of the Italian lifestyle is fused with the joys of city’s physical beauty.

The Italians brought so many gifts to Australia, but rugby was not one of them. For many years there was a cultural sporting divide: soccer for the so-called “New Australians” and rugby and rugby league for the Aussies.

Through their shared tradition, the Italians and the Irish were soon sitting next to each other in local Catholic schools. Very soon, “Rosy” O’Connell sat next to Martin Castrogiovanni and, sure enough, love was in the air.

Two of Australia’s greatest ever players, John Eales and David Campese, are the children of Irish-Italian families. The Irish and Italian communities are intertwined.

It is a great community and the banter is just as strong as in Ireland. After a greeting of Ciao, his Italian eyes were sparkling – he was about to wind me up.

“So you are off to the Rugby World Cup, writing for newspapers and talking on TV. Do you want me to tell to the paper’s editor about how little work you did at school? You doing rugby, cricket, surfing, basketball . . . never enough studies, now you write for a newspaper?”

His mock disbelief was a joy. I assured him I write it all myself and gave thanks for spellcheck. I was about to remind him that I did finish university when, thankfully, he changed the subject. These days the chat in the Italian community includes rugby.

“Why do they call them the Italian rugby team the Azzurri? That’s the football team and don’t call it soccer! Anyway, what do you call it in rugby when the big boys all grab each other?”

“Si, si. A scrum. Italy are good at that. They are big men and they tackle hard. I don’t understand the wrestling part when they are on the ground. What do they call it?”

He looked at me shocked. “Why do they call it such as stupid name?”

I had no answer.

“Anyway,” he said shaking his head at thought of being in a ruck. “We hit hard there but” – there is always a but – “the holding of the ball and running with it . . . Italy are always running into people. I thought in rugby you are supposed to run away from people and score?”

I assured him that he was correct.

“Why do they run into the other players so often? They are like the Emus. They can’t change direction.”

I shrug in sympathy.

“The Italian footballers, they can run. Like Francesco Totti. Now he was magic. Italy needs his kids to play rugby. But I like the captain, what’s his name?”

“Si, Parisse. He is a leader. A very tough man. I like him. His family went to Argentina. My cousins went there, but I never saw them again after the war.”

I can’t add much, because he has summed up the Italians correctly. Good set piece, very physical at the ruck, with a great captain. But the rest could not “tackle a fish supper” in attack or defence.

“Yes,” I reply. “Their coach and captain are fantastic. Their outhalf” – I think I lost him here – “is one of the best in the world. They could win the World Cup. ”

He raises his eyebrows in surprise. “Ireland?”

“Absolutely. But they have a similar problem to the Italians.” I have him interested now. “The Irish centres are running in to people because they are not using footwork and running straight.”

He’s gobsmacked. “Even in football you must run straight in attack.”

“They are also kicking away too much possession.”

“That is a shame. I would like to see Ireland win.Anyway,” he finishes, “I am starting to enjoy the rugby. It has only taken 40 years.”

He laughs. “Tell your Irish friends that they will beat us at the rugby, but I promise them: Italy will smash them at the European football. And don’t call it soccer!”

I could not have said it any better myself.