19 hours to prepare pitch, scrub stadium and flip Aviva from soccer to rugby 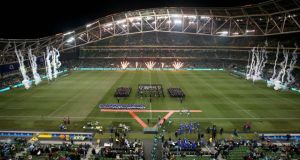 Ireland make their way out to face Samoa last weekend at the Aviva Stadium.

The Aviva Stadium faces its most demanding challenge over the coming days.

Croke Park did it this month in 2009, providing the canvas for Thierry Henry’s stunning goal on the Friday night before the Wallabies took the field the following afternoon.

Martin Murphy’s crew are tasked with flipping the stadium straight after the Republic of Ireland and Latvia launch the Martin O’Neill (and assistant Roy Keane ) era tomorrow evening.

Really, though, the juggling started yesterday with the Irish and Australian place-kickers doing their meticulous work on the grass.

“We have been planning this for some time,” Murphy, the stadium director, explained yesterday.

“The possibility of a (football) play-off was on the cards so we weren’t taken by surprise.

“It does require a lot of co-operation between the IRFU and the FAI, which is there.

“The thing that complicates starts with the two training sessions for the Republic of Ireland and Latvia on Thursday night . . .”

Lots of professionals with little interest in external barriers being placed in their path.

Friday
9am - Wallabies captain’s run
11am - Ireland captain’s run: “As soon as the captains runs are completed we’ve got to cut it, replace divots, make sure the surface is smooth for football to be played on it.”

Murphy estimates a five-hour window to make it look like an international football stadium.

7.45pm - Republic of Ireland v Lativa kick-off: “After that we have to change the whole stadium back over for rugby. The issues there are changing the pitch, the posts, all the commercial signage, both inside and around the pitch.

“It is further complicated by two different broadcasters [Sky for soccer, RTÉ, and BBC, for rugby] so it’s a big operation.”

Saturday
12am - Stadium emptied of punters, media and teams: “Hopefully we’ll have everyone out of the stadium by midnight but as soon as the game ends the goals will be down and the rugby posts will go up.

“The cleaning operation starts immediately and will go on through the night. “We’ve LED [video displays] signage around the pitch so that makes it easier. the host broadcaster for each game will leave and the other comes in.

Sleeping bags
“We’ll have people who’ll bring their sleeping bags into the stadium, literally, and they’ll take a few hours rest while working through the night.

“Fortunately we’ve got very good ground staff, and have got additional support in for them, but Majella Smyth is our groundsman. He is organising and co-ordinating all of that. That’s a big task.”

In total, there were 150 people required by Croke Park in 2009. Murphy has brought in an additional 10 workers this weekend.

5.45pm - Ireland v Australia kick-off.
The pitch, which showed the bumpy effects of the Rogers Waters stage for the Kazakhstan game, will come under scrutiny on Saturday evening.

“We invested a lot of money in the pitch over the summer,” said Murphy. “We are a multi-purpose venue so concerts are important as well. We had the Roger Waters concert and the stage area killed off some of the grass. That’s why it is less dense at the north end but at the same time the deso fibres give us a surface you can play on. It worked well for Samoa last weekend.

“But the main priority is to get the pitch right.”

And what about the other obvious problem of soccer parameters confusing the rugby players?

“We’re using a special sugar-based paint. It should wipe off well. There are different markings and the pitches are different lengths. We are fairly sure we can hand wash off the (soccer) lines. Manual labour and a bit of patience.”