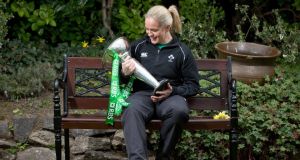 Ireland captain Niamh Briggs with the Six Nations trophy. Briggs is the March Sportswoman of the Month, an easy choice both for her own performances and as captain and representative of the 2015 Six Nations champions. Photograph: Inpho

Ireland’s Niamh Briggs is the winner of the Irish Times/Sports Council Sportswoman of the Month award for March, an easy choice both for her own performances and as captain and representative of the 2015 Six Nations champions.

There was a time when forecasting the outcome of a Six Nations campaign was straightforward enough, England’s domination of the competition interrupted on just four occasions between 1996 and 2013. By then only France had emerged as serious rivals, the rest of the nations largely also-rans. Well, with two titles in the last three years, Ireland have thrown the mother of all spanners into those works.

This year’s campaign was, perhaps, the most unpredictable of all. Reigning champions France had eight new caps in their squad, England similarly losing the services of a string of stalwarts after winning the 2014 World Cup, while both nations were also without a number of players whose focus has switched to Sevens rugby ahead of the 2016 Olympics.

Still, France and England have a strength in depth their Six Nations’ rivals can only envy, and Ireland had experienced their own upheaval after the World Cup – coach Philip Doyle had stepped down and his successor Tom Tierney wasn’t appointed until December, while the squad had also lost several of its most influential players through retirement, including captain Fiona Coghlan, Lynne Cantwell, Grace Davitt, Siobhan Fleming and Laura Guest. When Tierney named his 30 strong panel for the Six Nations, there were 12 new names.

A journey largely in to the unknown, then, but it began with a confidence-boosting cruise away to Italy, a 30-5 victory giving the new-look squad a perfect start. But it was back down to earth in their next game, the night the lights went out in Ashbourne, France coming back to win 10-5 after Ailis Egan’s try had given the hosts the advantage.

But the hunch that it might just be a campaign of surprises was confirmed by Wales’ shock defeat of England, and, later, Italy beating France. For Ireland to profit, though, from those upsets, they had to win their last three games – and that they did.

Niamh Briggs, Coghlan’s successor as captain, was, once again, the match winner, her late penalty giving Ireland an 11-8 win in Ashbourne, only the second time ever that Ireland had beaten the world champions. And then there was a potentially tricky trip to Swansea, but unlike England, Ireland weren’t troubled by the Welsh, a 20-0 win setting up that title shot against Scotland.

They needed a 27-point winning margin to beat France to the title – 73-3 later, the drubbing including an Alison Miller hat-trick and Briggs scoring the first of Ireland’s tries on her 50th international cap, and the job was handsomely done.

The success meant so much to Briggs, the Waterford native who is a Garda in Limerick, she slept with the trophy that night. She’ll have to make room for the March Sportswoman of the Month award now.

December: Ann Marie McGlynn (Athletics). The Offaly woman captained the Irish senior women’s team to an unlikely bronze medal at the European Cross-Country Championships in Bulgaria, combining with Fionnuala Britton, Sara Treacy and Michelle Finn to beat France by a point to a place on the podium.

January: Gráinne Dwyer (Basketball). For the second year running, Dwyer was the MVP in the National Cup final, this time driving Team Montenotte, Glanmire to success over Killester, top-scoring in the game with 20 points.

February: Sophie Spence (Rugby). The driving force behind Ireland’s Six Nations victories over Italy and England, the 28-year-old lock going on to play an equally influential role in the victories over Wales and Scotland that clinched the team’s second title in three years.

1 Timo Werner giving up on Liverpool dream on path to being truly wanted
2 Tianna Bartoletta: ‘After you’ve gotten your medal, you become black in America again’
3 Sideline Cut: Marcus Rashford proves himself a leading man off the pitch also
4 Ian O’Riordan: An education in race and running during college days in America
5 Premier League stadiums to be divided into red, amber and green zones
Real news has value SUBSCRIBE