Manner of this win for back-to-back Championships is incredible 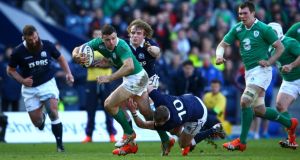 Robbie Henshaw of Ireland is tackled by Finn Russell of Scotland during the RBS Six Nations match at Murrayfield on Saturday. Photograph: Richard Heathcote/Getty Images

A total of 221 points and 27 tries in three matches on one day; how do you like them apples Steve Hansen? The best laid plans rarely survive the first shot and Wales, in scoring 61 points, certainly got a superb shot across the Irish bow before it became Ireland’s turn to post their score of 40 with the English finally settling on 55.

How can the Six Nations encourage this type of play earlier in the tournament; bonus points? Italy’s minus 180 points differential is horrible but their last seven points of the tournament kept the Championship window open and Ireland powered through. Of course the most significant number is ‘two’ Championships in a row.

The secret to this success will take future articles, but Jamie Heaslip’s last ditch tackle on Stuart Hogg or bagman Patrick ‘Rala’ O’Reilly’s outrageous attention to detail under the bowels of Murrayfield miles from the cameras give an insight into the talent and work ethic of this special group.

For instance, each player has a detailed job description but much of what Paul O’Connell or Cian Healy do is not written down, such as O’Connell hunting through a successful Scottish lineout forcing a turnover error from scrumhalf Greig Laidlaw.

That Ireland knew what they had to do made for a slightly riskier temperament. Yes the classic Joe Schmidt stamp was all over the pitch but Ireland looked a wee bit more comfortable on the plays that carried risk. The result, albeit against the wooden spoon was four tries and a Championship; food for future thought?

Ireland were certainly thinking as they exited from deep inside their 22 from one of many silly Scottish turnovers on 10:57 flowing down the left. Robbie Henshaw grubbered through along the deck with Luke Fitzgerald gathering and then mimicking likewise down the tram tracks.

The margins in these plays are very fine but Henshaw and Fitzgerald in selecting them pushed the boundaries of error and what a wonderful sight it was, as Tommy Bowe joined from his right wing, both Irish wingers in tandem, inches apart on the left wing hunting down the covering Scots. With all this early action Simon Zebo must have been begging for a magical pass into the fray.

Up front they were having fun too. Yes one out carries were evident but Ireland took them wider running on to them than previously where the real success was the yards after contact from the previous ball carrier.

The very first Irish scrum had Scottish tighthead Euan Murray under massive pressure. What a difference a week makes in refereeing the scrum as this one wheeled opening up the pitch and Ireland attacked flat with Bowe coming in off his blindside wing getting Henshaw down the left hand tram tracks.

Johnny Sexton carried off the breakdown, very flat and offloaded open to a fatty. The momentum, speed of recycle and yards after contact ultimately got O’Connell over for the first try.

From the Scottish kick off Ireland exited from right to left with Fitzgerald getting his first touch in International rugby. A difference between Zebo and Fitzgerald is style around contact where this time Fitzgerald slipped inside Dougie Fife and powered away in contrast to Zebo hitting and spinning in contact.

On 47:43 Ireland got their third clockwise wheel and drive on the scrum and like the previous two before Garces appreciated what Healy was doing to Euan Murray. From the penalty Ireland went down the line. Henshaw carried off the lineout maul and targeted a great attack on the Scottish inside shoulders where we saw what simply couldn’t happen in Cardiff; yards after contact. This gave our midfield a far more positive attacking picture. Ireland then mauled down the right hand side before Sexton unlocked a scissors in midfield to put Jared Payne under the posts. These yards also created penalties.

On 59:59 off an uncontested scrum on the left hand side Sexton brought Fitzgerald off the blindside getting the crucial yards forcing a poor tackle from openside Blair Cowan behind the gainline and bouncing up without disengaging to give away a cheap penalty.

The picture this gives the referee is a subject I’ll tackle come Friday but the picture these extra yards give the support players was crucial to Saturday’s success in Edinburgh.

The difference between the sides doesn’t require forensic examination but Scotland embrace errors like no other side in world rugby.

An Irish player that exposes his team to too many is jettisoned but what can Vern Cotter do; drop the entire Scottish team.

Just before half time Scotland returned an Irish kick into heavy traffic before their outhalf Finn Russell chipped a beauty over the on rushing Irish midfield. Somehow Matt Scott got around the corner fielding at full flight; two superbly skillful Scottish plays before Scott inexplicably attempted a sloppy Hail Mary offload and turnover.

At times the Irish defensive line speed slowed in what appeared to be a tactic around shepherding the lackluster Scots into touch.

I’m not sure was this a preconceived ploy or how it evolved but this Scottish team didn’t need free space and a better side would have punished Ireland which Russell managed to do on the 29th minute try with an imbalanced blindside defence.

Pushing the boundaries a tad into the error zone against weaker opposition gave Ireland an opportunity to explore a route to the try line. Infinitely more challenging opposition wait around the corner but the value and the manner of this win for back to back Championships is incredible making Ireland a pleasure to watch and ultimately outrageously tough opposition to beat.

PS; It may be certain players last Six Nations but it’s definitely the Legend that is Rala’s last Championship; danke schoen; what a way to finish!