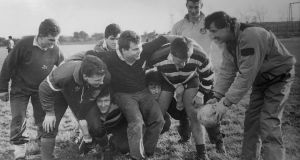 I walked into Anthony O’Dwyer’s pub on Limerick’s Wolfe Tone Street last week to a very special gathering. I was greeted with a question: “how many Munster Schools Cup medals are here since your man walked in?” I played seven Schools Cup matches for St Clement’s College and won none of them. Across town in Crescent Comprehensive College the Jesuits were winning them for fun. The first time I played in the famed ‘CCC’ school I recall their gym was ablaze with ‘Dudley’s Army’.

It was a double bed sheet hanging high and artistically adorned with black paint. It was my introduction to Dudley. I was 12, it was 1984 and obviously this guy Dudley had managed to convert the Jesuits into some sort of militant force.

For most, it started in Old Crescent in 1982. We were greeted by a great: Neil ‘Flee’ O’Sullivan. He transitioned us from Gaelic football to rugby. We discovered that smashing other guys was welcomed.

Fast forward to the 1989 Munster Senior Schools Cup. Finally, St Clement’s were among the favourites to win. But we lost to Presentation Brothers College and sneaky peaky Crescent managed to get to the final. There they faced hotly fancied Christian Brothers College, led by scrumhalf David O’Mahony. Alan Reddan, from the famous Reddan rugby clan, saved the day.

Crescent captain Billy O’Shea threw a big one to Tomas O’Connell which didn’t go to hand. Christians hacked through, and but for Reddan’s pace and ability to read a situation the cup would have stayed in Cork. Few could see how this Crescent team had it in them. Here lies Dudley’s magic.

Although that team would win back-to-back cups built around a future British and Irish Lion Test winner in Paul Wallace and countless Irish Schoolboys, there was something else far less tangible.

As my great friend Gareth Dinneen, of the famed Dinneen dynasty and winner of two Schools Cups under Dudley, noted last week: “If we are lucky, we are gifted a special mentor in our teenage years. A person that makes a lasting impact often without them knowing it, often a teacher or a coach. An adult that takes time, speaks to you as a peer, senses potential, ignites a spark within and blooms an inner confidence that you take with you for the rest of your life . . . your gentle ways of creating a safe environment for absolute expression, I’ll endeavour to pass onto my sons. Your ways will live on. What a privilege to have been guided by you. ’Til we meet again lovely man.”

What propelled Nicky Barry in 1988 to run down the blindside of Thomond Park to score one of the greatest individual tries the famous ground has witnessed? He did so in the Irish Schools number 10 jersey with English schoolboy Martin Johnson in his wake.

Was it something the Irish Schools coach had pre-planned or was it something deeper; planted in the freedom to express in Crescent School? What was this unique atmosphere?

Dudley’s coaching ticket, which included Don Reddan, father of that rugby dynasty, won four Schools Senior Cups at Crescent in 1983, 1986, 1989 and 1990. I know many of the players spread over those four campaigns and there is something unique. They all can think rugby.

Yes, the modern professional player has many more advantages, thanks to the gym, but few could out-think and out-execute like Dudley’s army. Dudley had a deep understanding of rugby, one that captured my attention on my first training session with him in 1988.

We were nervous but he was so engaging that immediately this disparate bunch coming together were almost taking over: discussing and offering ideas in the safety that no idea was lower than the other. Quickly there developed a relationship between coach, player and idea. Whose idea it was, no one knew, no one cared.

With a nod to the Connacht’s revival, Pat Lam wasn’t the first rugby legend out west. Dudley came from Achill Island. Hardly the breeding ground for a future Crescent Army but the teacher of art brought something artistic to Limerick. In the hundreds of hours we all spent debating rugby we must have had differing views but staying true to his nature even as adults we laughed and debated with never a winner or loser; just bountiful ideas.

With the recent World Cup and Six Nations in mind, do the Irish and interpro coaches debate as freely? Why are our five professional teams playing different games with different philosophies? Of course, it was always thus but it doesn’t have to be. In Dudley’s world there was no barrier to entry; talent was embraced, encouraged and loved. That team of 1990 were outrageous; led by Mike O’Mara, a free-spirited team which I defy you to benchmark against any principle of rugby.

Crescent hadn’t won a Munster Schools Cup for 20 years before Dudley’s arrival. His contribution to Crescent, Munster and Irish Schools was immense.

Dudley Herbert is survived by wife Jackie and sons Ruairi and Gavin. The musician, teacher of art, teacher of rugby, teacher of life passed away peacefully last week and, although that double bed sheet has long gone, the gifts that Dudley gave us will live on for many years through the generations that long for a “Dudley”.

What’s a “Dudley” you may ask? Well, Dudley lived in Newtown, Castletroy, and enjoyed O’Shea’s Pub. Often hesitant to stay or to go when time was called, he would loiter at the door and meekly say, “sure, I’ll stay for one more”.