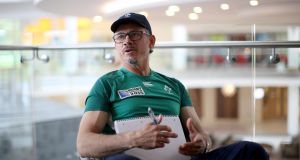 Ireland defensive coach Les Kiss at a press conference in Staffordshire, England on Monday: he said Romania have experience in the front-row, which gives an “opportunity to expose a few blokes to that”. Photograph: Dan Sheridan/Inpho

Ireland defensive coach Les Kiss on Monday strongly indicated there will be wholesale changes to the Irish team for Sunday’s second pool match against Romania at Wembley.

The intention is to ensure all 31 squad members will have seen some game time by the close of business against the Romanians, thereby also ensuring a happier camp when they move on to Guildford next week in readiness for the pivotal pool games against Italy and France.

Kiss, one of those like Paul O’Connell and their long-standing bagman Paddy O’Reilly, for whom this World Cup will be his farewell pending his move to Ulster, confirmed a clean bill of health prior to their first training session at St George’s Park on Monday, which had been put back due to a morning downpour.

“Ideally, it would be good. We’ll sit down after today and have a good talk about that. My initial take on Romania is we know they have some experience in the front-row. They rely a lot on that set-piece.

“So we’ve got a challenge there. Maybe it’s an opportunity to expose a few blokes to that. For us, it is important we don’t take our eye off the ball, but we’ve got a lot of faith in this squad, so hopefully we can get that opportunity moving on.”

They also have more of an unknown quantity about them than Canada, albeit with a cruelly pitched draw given they play France and Ireland within five days. “It’s interesting because Merv [Murphy] and Vinny [Hammond] our analysts have done a complete profile on them,” said Kiss.

“. . . They would have upwards of 20 to 40 clips on each of those guys, so we have a bit of grounding on them. We are just waiting to see how they select.”

Besides which, Japan’s win over South Africa was a warning for all the big guns. “What Japan did . . . should tell us all that anything is possible under any circumstances. If you take your eye off the ball because of that then you’ve just done yourself an injustice and probably disrespected them. So we don’t intend to do that.”

Of Japan’s win, Kiss said: “Ah massive. Fantastic. I don’t think anyone could begrudge them anything in that. I do feel for Heyneke [Meyer].

There’s a lot of pressure there and I do feel for him. On the other side, Eddie [Jones] has pulled out a masterstroke there, and [Steve] Borthwick has done a sensational job . . .

“They were absolutely brilliant. And well, it’s the story of the tournament already, isn’t it?” No one argued with that.