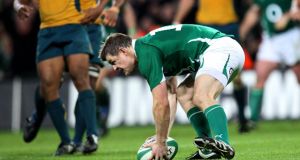 The game began and ended on set moves to release Brian O’Driscoll; the first of them coughing up a seven-pointer for Australia to open the scoring, the second to earn Ireland a last-ditch reprieve.

That rather summed up the patchy nature of Ireland’s performance, for in between times O’Driscoll scarcely received a ball, and one that he did came with a red cross on it.

Ireland tried to broaden their canvas by opting to play what they saw on a good few occasions, and even daring to counter-attack. By contrast, Australia varied less from their well-honed play book – save for the odd spark of genius by Matt Giteau – but established a controlling foothold for long stretches with their attacking patterns.

At times this approach left Irish ball-carriers isolated; the crowd collectively gasped when a lone Irish runner was engulfed by two or more gold-shirted tacklers. The turnover or penalty for not releasing was almost inevitable. Pilferer-in-chief was David Pocock. His razor-sharp body positioning, strength and elasticity were a textbook lesson in the openside arts for any aspiring No 7, but he was ably supported by the cast in gold.

Rocky Elsom, Wycliff Palu et al were collectively far more alert, bodies piling in hard and low quicker, in more numbers and to better effect than their counterparts. Their cleaning out achieved just that, crystal clean ball for Will Genia and Giteau to pull the strings.

The fears for the Irish front row were realised, for although Cian Healy was spellbindingly good in the loose on his debut, the scrum was filleted. Healy appeared to be harshly treated by the sometimes pedantic (though consistent) Jonathan Kaplan once or twice, while John Hayes looked to be sucking diesel long before the end and was turned inward at several put-ins.

But the awful Aussie lineout kept Ireland in the game, as they took four of the visitors’ throws in the first half. Ireland will also rue a host of decisions. Aside from the opening try, one didn’t need the hindsight of 20-20 vision to question the decision by Ronan O’Gara, toward the end of the first half with the score at 10-6 to Australia, to eschew a probable three points from about 30 metres out in front of the posts for a unproductive crosskick to Tommy Bowe.

But, with typical mental strength, O’Gara recovered from that early blip, and his general kicking game, decision-making and distribution were of a high quality.

In what was something of a defining game in his career, this proved he’s not a busted flush just yet.

The Wallabies had been bracing themselves for 80,000 screaming Irish supporters but, not surprisingly, the game kicked off to a typically subdued Sunday atmosphere. The official attendance was 69,886, but there seemed to be more empty spaces than that.

Australian benevolence
And the benevolence extended to the Aussies included a gift-wrapped seven-pointer inside three minutes, complete with appropriate ribbons and bow. From clean lineout ball off the front from Donncha O’Callaghan, Ireland attempted a move from their own 22, seemingly to put Brian O’Driscoll into the space outside Digby Ioane. Instead though, with Paddy Wallace perhaps a tad too flat, Ronan O’Gara’s pass was too far in front of the Irish captain. He couldn’t hold on one handed, and with Rob Kearney outside him in the line, Drew Mitchell picked up and ran in untouched by the posts for Giteau to convert.

Ireland were helped back into the game with an O’Gara penalty soon after, following a good kick and chase by Kearney, and dared to counter a few times, Fitzgerald, O’Gara, O’Driscoll and Wallace combining once, before O’Driscoll gave Fitzgerald a run and kick up the line with a pacey, cut-out pass. Rumbling close-in off a lineout, Ireland launched David Wallace infield, where Rocky Elsom was a little harshly adjudged to have played the ball on the floor. O’Gara made it 6-7 but fantastic counter-rucking by the Aussies, from literally numbers one to four, enabled Giteau to restore the four -point advantage. It required a tap tackle from O’Driscoll to bring a 40 metre gallop by Elsom to a halt and Kearney made his last-man, try-saving tackle on Giteau after a lovely show and angle by the impish Aussie outhalf.

Kearney’s willingness to counter reaped a dividend when Palu was binned for a dangerous tackle on the fullback, though in the current climate of savage, big hits it could have been interpreted as a tad harsh. A cluster of Aussie fans clearly thought so, treating Croker to its first chorused rendition of a word beginning with “bull”.

Helped by O’Gara’s desire to go for the million dollar play, and having survived that 10 minutes unscathed to turn around 10-6 ahead, Giteau should have extended the lead with another penalty. But Ireland were pulverised on one put-in and Hayes was pinged at another for Giteau to make it 13-6.

Ireland needed a big play, and in one of the game’s most important interventions Paul O’Connell got his paw to O’Gara’s restart and Healy set off at full tilt into Australian territory. A wave of carries and recycles, Stephen Ferris figuring prominently, ended with Tommy Bowe picking up Tomás O’Leary’s skip pass and he took Ashley-Cooper’s tackle to score.

O’Gara’s conversion drew the sides level before Drew Mitchell made the initial inroads when isolating O’Callaghan and, with Giteau providing some width off the phases, prop Ben Alexander deftly gave Elsom a 30-yard charge to the corner. Giteau’s wonderful touchline conversion added the extras.

A lineout steal by O’Callaghan and rumble by O’Connell set up a white-knuckle finish, Ireland spending the final five minutes hammering away. Bowe was over the line after cutting through the Aussie centres but Peter Hynes stopped him clearly grounding the ball. Cue the final scrum which, with some irony, provided the platform for Ireland’s get-out-of-jail card.