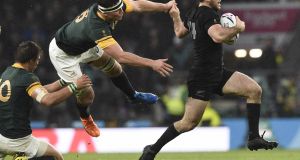 “It is not the mountain we conquer but ourselves.”

– Edmund Hillary, the first man to conquer Met Everest For the ages. The greatest team of all time met an equal foe and survived. You would be hard pressed to convince any of this 80,090 Twickenham gathering that they had not just witnessed the World Cup final.

Many of rugby’s most gifted and imposing players entered this gladiatorial arena and delivered in what must rank high in the history of the most brutal of sporting rivalries.

The first 40 minutes belonged to South Africa’s defence and accuracy, but the total 80 became a testament to New Zealand skill and refusal to buckle.

On first glance it was also a victory for the officials. On second glance Jerome Garces’ quickly reflective decision to sin-bin Jerome Kaino just before half-time seems harsh. Somehow the loss of this brilliant blindside galvanised the All Blacks to new heights as they, crucially, won that 10 minutes 3-0 thanks to a magnificent drop goal by Dan Carter.

The world champions could have been out of sight by half- time, instead they trailed 12-7.

Handre Pollard settled into his kicking duel with Carter when Kieran Read got pinged for landing into the side of the Springboks effective lineout maul after just two minutes.

New Zealand came roaring back, attacking with the most amazing angled running, but the Springbok wall refused to crumble. Also, Willie Le Roux was impervious under the garryowen, so Ben and Aaron Smith changed tack, cleverly electing to go around their gargantuan opponents.

Off a static All Black maul, Joe Moody carried into midfield and when they switched back left, the flawless Ben Smith fired a skip pass to Richie McCaw in the wide channel. Bryan Habana and Fourie du Preez shot up but McCaw lofted the ball into Kaino’s outstretched hand for a try in the corner that Carter converted.

From one steal on 22 minutes McCaw dashed in to retrieve the lost ball, catching Louw with his hip. Replays show that a citing would be the wrong decision.

Louw returned with a stitched forehead, received in another incident, to see South Africa leading 9-7 after Pollard’s flawless boot punished McCaw and Nonu offsides (the penalty count was 13-6 in South Africa’s favour).

Then came two important Ayoub interventions. Schalk Burger was penalised but not sin binned for a shoulder charge. Carter’s penalty hit the post.

More drama. As JP Pietersen opened his legs for a 90-metre intercept try off Nonu’s errant pass, Garces was racing across the field to signal a New Zealand penalty. Ayoub disagreed, highlighting a neck roll by Moody on Duane Vermeulen, so the French man reversed the penalty. It was the correct decision but the Kaino yellow card on 38 minutes felt like an overreaction. Having tackled Fourie du Preez, Kaino conceded a penalty for being accidentally offside as he retreated around the ruck, but Garces looked at the replay and deemed his toe poke of the loose ball to be deliberate. Pollard coolly landed his fourth penalty from four.

The mortal blow was landed three minutes after Kaino’s return. This second try originated from Carter ripping ball out of Burger’s clutches. Aaron Smith pounded his forwards towards the line with Nonu rewarding their endeavours in his last contribution of the semi-final.

Smith, noting the advantage for Bryan Habana’s cynical play, eventually went wide to Carter who fed Nonu in a two- on-two situation, again in the wide channel. The Toulon- bound centre’s arcing run tempted Pietersen to momentarily step off his wing, despite Damian de Allende screaming at him to stay on Beauden Barrett. Nonu made him pay.

This epic rumbled on. South Africa won a scrum penalty that Pollard landed to make it 17-15 but within two minutes Carter nudged the All Blacks five clear again after Eben Etzebeth was done for sealing off. That kick made him the highest-scoring All Black at World Cups, surpassing Grant Fox.

Heyneke Meyer responded by launching 193 caps from his bench in the shapes of Victor Matfield and Jannie du Plessis.

Matfield quickly became the latest ruck cleaner to fall foul of the TMO for a neck roll. It proved costly as Pollard had been lining up a long range penalty. Pollard was forced off soon after so it was up to Patrick Lambie to gift us a tense last 10 minutes after Read coughed up another penalty.

Sam Cane fumbled as New Zealand once more stormed into the Springboks 22. Matfield urgently shifted it wide to allow Lambie belt it 80 metres down field. Carter got across to side foot it into touch. The All Blacks resisted South Africa’s last driving maul, Aaron Smith pinching spilled ball yet sliced it into touch, but Matfield couldn’t grab the lineout and play inched back into South Africa’s territory.

After a never-to-be-forgotten eight-man New Zealand shove, the last Springbok knock-on was by the 38-year- old with 80.38 on the clock.

“We’ve probably got the greatest skipper and greatest player the All Blacks and maybe the world has had, without getting ahead of ourselves.

“As a young captain in 2007 Richie was criticised a lot and I know that hurt him. But he’s grown, we’ve grown a leadership group that has a massive amount of self-belief.”

Undoubtedly men of Hillary’s silk, they see the mountain top again. McCaw to plant the flag and thereby confirm Hansen’s words by becoming the only man to lift the golden William Webb Ellis trophy a second time.

Bohemians appoint climate justice officer 10:00
Jordon Ibe has been ‘in a dark place’ with depression 09:10
Tokyo under ‘real pressure’ amid rumours of Olympics cancellation 07:20
Jerry Kiernan’s death felt beyond athletics; tennis stars show their full sense of entitlement 07:08
Brandon Nagy reels off 10 birdies to lead at American Express 06:41
Crossword Get access to over 6,000 interactive crosswords