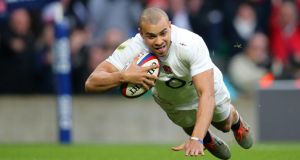 Jonathan Joseph scores a try for England against Italy. The centre crossed over twice in a man-of-the-match performance. Photograph: Cathal Noonan/Inpho

Jonathan Joseph’s two-try performance for England against Italy not only earned him the man-of-the-match accolade but prompted a number of headline writers in the British media to whip up some superlatives.

The Guardian described him in a headline “as the missing link in England’s World Cup plans”, the Daily Telegraph enthused, “England hail X-factor of Six Nations sensation Jonathan Joseph as Ireland draw up special plans”, while the Daily Mirror touted him as “England’s lethal weapon”. No pressure then for a lavishly talented 23-year-old winning just his eighth cap.

England’s number 13 jersey has been unlucky for several since, say, 2010, with Mike Tindall, Joel Tompkins, Manu Tuilagi, Brad Barritt and Luther Burrell amongst others trying it on for size. Even Matt Banahan, Bath’s 6’ 6” inch wing, got to measure himself one-on-one against Brian O’Driscoll in a Six Nations match in 2011 – the experiment wasn’t a success.

Joseph’s rugby development was nurtured at Millfield school from where he joined the London Irish academy – Marland Yarde and Anthony Watson were also there at the time – spending four years with the Exiles before joining Bath in 2013.

The player was capped out of London Irish, his debut coming on England’s tour to South Africa in the summer of 2012, first as a replacement fullback and then in the second and third Tests in the centre.

“He’s a different player. Jerry was more of a swerving outside-centre, when there was a big hole in the 13 channel. There aren’t many holes any more. JJ’s footwork and his ability to slip out of tackles and stuff, is phenomenal. That’s the X-factor you need to win games.”

Joseph scored his two tries against Italy having switched to the wing following Mike Brown’s injury that saw Anthony Watson move to fullback and Billy Twelvetrees come on in the centre. His ability and versatility means that he could switch between the two positions.

“Going into a World Cup you’ve got to have four centres. Having guys like Manu who can break down a defence in a different way to how JJ does is what you want. You’ve got a good balance there and competition.

“For Manu to get his place back you’re going to have to see some fireworks there. Let’s see how it carries on going. It’s just great to have a consistency again between a centre partnership.”

On Sunday week, the Joseph/Burrell axis is likely to square off against Ireland’s Robbie Henshaw and Jared Payne; as a benchmarking process it will be interesting for all concerned.