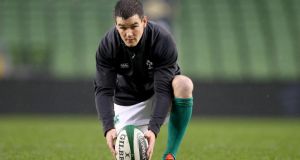 Ireland’s Jonathan Sexton: resigned to being out of action until at least February 14th, the day Ireland play France at the Aviva Stadium. Photo: Dan Sheridan/Inpho

Ireland will have to begin the defence of their Six Nations crown against Italy without Johnny Sexton, who is resigned to being out of action until February 14th, the day Ireland play France at the Aviva Stadium on the second weekend of the 2015 Six Nations. As he will then have been without a match for 12 weeks, Joe Schmidt will have an awkward decision to make as to whether that should be Sexton’s comeback game.

Sidelined since suffering concussion in Ireland’s win over Australia at the end of November, this 12-week rest is on the advice of a Parisian neurologist, Dr Jean-François Cherman, who is employed by Racing Metro along with several other rugby and football clubs to examine all cases of concussion within their clubs.

Reports on the website of the daily French sports newspaper L’Equipe, where the story broke yesterday (not long after a press conference confirming the arrival of Dan Carter on a three-year deal to replace Sexton) suggested the latter had been suffering from headaches and nausea. But they appear to be, thankfully, a little alarmist.

While they have not been severe concussive episodes, and Sexton is apparently relatively symptom-free over the last fortnight, Dr Cherman is of the view that Sexton should take a 12-week break from all contact work to allow ample time for the problem to be cleared up. Dr Cherman is regarded as an expert in this field.

Sexton’s lengthy lay-off is a precautionary measure but on the understandable premise that his health comes first.

This means Sexton will be absent for another seven games for Racing Metro, including Top 14 games against Toulon and Clermont as well as their final pool games in the European Champions Cup against Treviso and Northampton, to add to the three he has missed since the Australia match. He has only played six matches for the Parisian club this season as a broken jaw had earlier sidelined him for seven games.

Sexton has been an ever-present under Joe Schmidt save for the November games against Samoa last season and Georgia this season. But he is now ruled out of Ireland’s opening defence of their Six Nations title against Italy in Rome’s Stadio Olimpico, where Ireland lost in Declan Kidney’s final game as Ireland coach two seasons ago.

Ian Madigan was back-up to Sexton on the Argentinian tour and in the Guinness Series last November when making his first Test start at outhalf ( since the 2012 summer tour games in north America) against Georgia. This season he has been playing at inside centre for Leinster.

Paddy Jackson, who was the starting outhalf two seasons ago in the games against Scotland, France and that fateful defeat against Italy, was back-up to Sexton in the first four of last season’s Six Nations games, although hasn’t appeared since coming on as a replacement in the home win over Italy.

Whoever is now chosen to replace him, Sexton will now use the next eight weeks as a quasi pre-season. With the World Cup also in mind, it may not even be the worst thing to happen to him.

At least Sexton will be able to kick and run, and pretty much do anything besides risking another bang on the head for another eight weeks, and so will be physically fit if not match fit.

His need for match hardness and to be more familiar with collisions would be more acute if, say, he was a backrower, but then again he is one of the more physical and effective defensive outhalves in the world.

The imposition of an enforced 12-week absence may seem unusually exact for something that, unfortunately, is anything but an exact science. But at least the reason for Sexton’s absence is precautionary in nature.