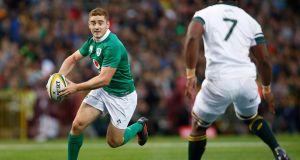 Although it’s hard to think of a better one-off Irish win, or certainly a better one day, Joe Schmidt struggled to put this epic 14-man Irish victory – their first in South Africa – into context, and his mood was also tempered by his expectation of a Springboks backlash as well as his unhappiness with the decision to red card CJ Stander.

“It’s pretty hard to put into words really. I thought it was an incredible collective effort. The nine minutes before half-time when we were down to 13 players, to just put them out in the corner, just to scramble and work as hard as the players did to keep them out.

“There was almost a direct repeat at the end of the second half again. To their attacking left-hand corner, we managed to scramble across and three for four players turned up to avoid the try being scored.

“For the players, I think they can be incredibly proud of the effort they put in.”

Regarding Stander’s red card, the Irish coach was unequivocal in his view that it was unwarranted.

“I thought the red card was very, very harsh to be honest. CJ’s got both hands extended, once you’re in the air you can’t change your trajectory. The one thing I would say, I think Pat Lambie’s a super player, I certainly hope that Pat’s okay.

“I know CJ and Pat are friends, and that they know each other. CJ was upset that Pat was hurt as much as he was upset that he had to leave the field. It’s one of those thing that happens. I think, sometimes, when there is an injury like that, the consequence is that a card comes out and that was the result.”

Hence, Schmidt was hopeful that Stander would not incur a suspension when he faces a disciplinary panel – as is the normal protocol in light of incurring a red card, and thus have him available for next Saturday’s second Test in Johannesburg.

“We’d love to. We’re going to find out in the next couple of days what, if any, consequences there are from his attempted charge-down.

“So, we’d be delighted to get him back if that’s possible. If we don’t, this is a 32-man squad, there are 32 players working to try and be selected and it means somebody else will step up and fill the breach.”

“They still put us under real pressure. Their ball carriers, I thought Siya Kolisi a couple of times really knocked players back, Pieter Steph-Du Toit brought a fair bit off the bench. Obviously, he got that intercept but, apart from that, his athleticism was very visible. I do think it looked like a first performance together for them. Probably, the fear I do have is I have no doubt that they’ll be improved in Johannesburg.”

“It’s the home patch for Faf de Klerk and Elton Jantjes so I think it would be dangerous to get carried away with today’s performance. We’re incredibly excited by the little bit of history, the small step we took today but there’s still two incredible large steps to take; one of them at altitude that will be very tough.”

Ireland’s win followed that of England’s over Australia earlier in the day, after Wales had also led New Zealand at half-time in the first June Test of the day, but Schmidt did not see this as evidence that the tide was turning between the hemispheres.

“You can always get knocked over by a freak wave very, very quickly in this game and it was nice too that we managed a bit of continuity and even we managed to get a little of space up the middle with 13 v 15 where Jared Payne went through a little bit of space and linked up with Jack McGrath in behind the line.

“It allowed us to build a little bit of field position. Paddy Jackson managed to knock a goal over so I watched the other games this morning. I thought England were good for their win, they were probably aided by probably 15 penalties conceded by Australia, that always helps a team get into the game and build continuity and rhythm going forward.

“Wales, to lead at half-time against the All Blacks is no mean feat. So, I was delighted for Gats. Eddie, obviously, he’ll be delighted with what they achieved today as well.”

Having coughed up an intercept try, Jackson showed nerves of steel to land the penalty which increased Ireland’s lead to six points for the taut endgame, and Schmidt ventured: “Paddy’s got high standards, the first thing he said to me was he apologised for the intercept pass for Pieter Steph-Du Toit. He didn’t realise how long that man’s arms were, how good his hands were and how athletic he was to get off the line, but Paddy did some super stuff. I thought he controlled that first 20 minutes, I thought he controlled really well. We actually build our confidence through that period.

“With some really good territorial play, we managed to earn possession and we managed to turn that possession into points. That certainly helped us get a little of confidence, we had a lot of players who haven’t had a lot of time with us and it tends to be that your leaders, they tend to have the kind of contagious – both in experience and confidence – that you miss a bit when you don’t have them. For guys like Paddy, who stepped up today, I thought they did a super job.”

That endgame was akin to the one in which New Zealand snatched victory from Ireland at the Aviva in November 2013.

“I don’t think we flashed back to there, I think we’ve come a long way since then,” said Rory Best.

“There was similarities to it, but for us it was about the way we stood up. It’s not easy to come here and win, there’s a reason no Irish team has ever done it and to do it for just short of 60 minutes with 14 men, it took a lot of character.

“For me, as captain of this 32-man squad, it wasn’t just the XV that took the field or the guys that made an impact, I think you tell a lot about the individuals that you have at your disposal by what they do when they’re faced with a bit of adversity.

“There was no real panic whenever we went down, we knew it was going to be incredibly tough but what a way to make history, by having to do something special.

“We sort of knew we had to keep going at them and at them, because if you sit back against the Springboks and try to soak them, it’s just not going to work; they’re too big, too physical, too good a rugby team.

“So we knew we had to keep going at them and it’s a credit to a man, the guys who came in off the bench, they really did that.

“It’s a very special win, to come here and win but we’ll see in the next few weeks exactly how special it is in terms of creating history. Whether it’s a one-off or whether we can go on and clinch a series.

“To win any game when you’re faced with going down to 14 men is special and to do it here, with everything . . . look, it’s a special game, a special performance..