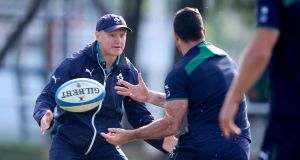 Joe Schmidt has confirmed that Robbie Henshaw and Jared Payne are the two front-runners to assume the number 13 jersey vacated by you-know-who, but had no specific plans as to who will be used in which games when South Africa, Samoa and Australia come to town next month.

The Ireland coach hinted that Henshaw was possibly the marginal favourite at the moment given Schmidt’s greater familiarity with the Connacht centre. He has also been impressed with the 21-year-old’s form.

“I think he has started the season very, very well for Connacht” and admitted: “I think he’s more ready than he was last year”. Yet Schmidt was clearly keen to see the 29-year-old Payne in camp now that he has recently qualified through the three-year residency rule.

“No, to be honest,” Schmidt answered when asked if he had any clear plans as to who will start the opening Guinness Series match against South Africa, or the subsequent Tests. “There’s two players there right now with Robbie and Jared and those two players are likely to get some time there, providing they come through fit this weekend. That’s where we’re looking at the moment. On our radar remain Darren Cave and Keith Earls, or adapting somebody else to the position, but the first bite of the cherry is likely to go to those two guys.”

In explaining his omission of Paddy Jackson from the squad for the first time (Jackson was an original pick for all three of Schmidt’s squads last season before withdrawing from the Argentine tour) Schmidt was at pains to stress that he had “no influence” on provincial selections, and specifically that he “put no pressure on provincial coaches to select players in any position”. Indeed, nor did Les Kiss in his time at Ulster as acting director of rugby, where he was no more than “a devil’s advocate” at selection time.

That issue had more to do with selections at midfield, but regarding Jackson, Schmidt felt the Ulster outhalf would be better served accumulating a run of three more starts for Ulster this coming Saturday, while taking this opportunity to work with Ian Keatley.

Payne is one of five new caps in the squad, and another Kiwi to qualify through residency is 33-year-old Connacht tighthead Nathan White, whom Schmidt worked with at Leinster.

“We need to be made of more,” said Schmidt, referencing the catch line for the new Guinness advertisement campaign ahead of the November series. Schmidt yesterday met with Dr Mike Gervais, “one of the world’s leading sports psychologists”, who was flown into Dublin to meet with Schmidt and other members of the Ireland coaching staff including squad psychologist, Enda McNulty.

“We need to be made of more depth, more substance and the new faces are around that,” said Schmidt. “Nathan White, specifically, has had a really good season with Connacht and that was represented in the performances they’ve had against some pretty tough teams.”

Looking to the month ahead, Schmidt maintained that Ireland’s Test series will be performance driven. “I think in the context of progression, nothing is linear in sport. Nothing ever goes on a straight, upward curve, and one of the things about a straight upward curve is that it presumes a number of things stay constant, and we already know there’s a massive inconsistency in what’s available,” Schmidt said, in reference to 15 Test players being injured, and much would also hinge on the players’ condition when reporting for duty next Tuesday after the weekend’s second round of Champions Cup matches.

He could not say that wins over Samoa and either of the heavyweight southern hemisphere duo would be a mark of progress in terms of results, but admitted: “If you offered me one I’d grab it. Without a doubt, we’d love to get a result. I think it would be fantastic for us as a rugby nation. It would be fantastic for the supporters who have already sold those two Test matches out because I don’t think they are coming without hope and that is why you go to sporting events.”

Schmidt will come up against his predecessor at Leinster, Michael Cheika, in Ireland’s November finale, and the Kiwi wryly noted the Australian is one-nil ahead from Leinster’s 29-28 Heineken Cup quarter-final win over Clermont in 2010

“I think he’s got a super squad,” said Schmidt, citing Australia’s own, uncannily similar and heartbreaking 28-29 loss to the All Blacks last Saturday in Suncorp Stadium. “You talk about us not quite getting the scalp, I think we came every bit as close as the Wallabies did but, gee, that was a super effort. If you look at any statistic from that game, you’re asking yourself how did the All Blacks win it? It was one of those games where Australia looked so dangerous throughout the game as well and consolidated that with the points they scored.

“So, I guess, that’s a massive challenge for us.”

“South Africa do loom large,” he added, appropriately, of the gargantuan Springboks. “There’s the new and the old there and they have got a great mix and they’ll be very tough. I’d take one or the other.

If we don’t get the first one I’ve just put myself under the hammer I know, but what you want and what you get are not necessarily the same thing. What I am saying is that we don’t need to get those to keep growing our confidence, but it would certainly help.”
Munster’s historic 12-0 victory over New Zealand in 1978 is retold in a new Guinness ad campaign to air on Irish TV for the first time on November 5th, ahead of Ireland’s opening Guinness Series fixture.

COACH’S INSIGHTS
On informing Paddy Jackson he would not be in the squad: “My discussion with Paddy was initial disappointment probably balanced by a very mature young man who has had tough moments on the pitch in the Six Nations as a young man starting games that were very, very tough.He’s got through those, he’s mentally a very sound character. He’ll get through this and he’s already looking at the challenge it represents for him rather than the disappointment that is now in the past.”

On the option of playing Gordon D’Arcy at outside centre: “He is another player who we think can cover 13 but jeez, he’s a good 12 and sometimes you just want to make sure that people can contribute where they’re most comfortable and most effective and have the experience in. For example, if it is Robbie at 13, what better man to have inside him than Darce? I think that sort of thing is important when you starting to put combinations together. Not that we’ve made our minds up. That will happen through camp and once we get them training.”

On Leinster as “a breeding ground” for coaches and players: “That production line has managed to offer up three [European Cup] titles and a number of other palmarès [awards or achievements] that Cheiks and I have benefited from because we have worked hard to create a player-driven environment. I have no doubt that Michael Cheika had a big part to play in that and for us he’s a dangerous addition to the Australian group, because he does drive an environment and a culture and that’s what he did at Leinster and that’s what he did with the Waratahs.”