Joe Schmidt has every confidence in Keatley

Joe Schmidt says that they had one of their longest selection meetings before announcing the Irish team that is going to travel over to Italy in their opening Six Nations game. 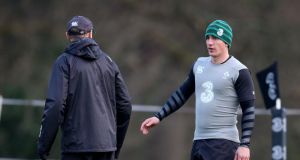 Ireland coach Joe Schmidt has a word with his outhalf Ian Keatley at training this morning. Photograph: Dan Sheridan/Inpho

About two years ago the penny dropped in New Zealand that Dan Carter was mortal. So began the quest to anoint his long term successor, which seemed for a long time to be Aaron Cruden.

It may still be but the waters have been muddied of late. Cruden, not unlike Ian Madigan, is a thrilling player with ball in hand and also trustworthy off the tee. Yet in Beauden Barrett they have an arguably more exhilarating first-five-eight.

Ireland don’t have a player like Barrett. They do have Ian Keatley.

But in Colin Slade the All Blacks have belatedly unearthed a reliable number ten blessed with the sort of experience gifted by age. And the patience that inevitably follows.

Slade is 27. Same age as Ian Keatley. The Dubliner has earned this, albeit temporary, promotion in Johnny Sexton’s enforced absence.

Keatley has paid his dues; coming out of Belvedere College in 2005, on a Leinster schools cup winning side that included Cian Healy and the since retired Paul O’Donohoe and Eoin O’Malley (not to mention UFC welterweight Cathal Pendred), he was never capped by Leinster.

When JJ Hanrahan threatened to rise out of the Kerry rugby enclave of Castleisland RFC last season, Keatley held firm.

Anthony Foley placed full faith in him as the Munster ten this season, perhaps prompting Hanrahan’s decision to sign for Northampton, and Keatley repaid him when others could not.

“He has finished off games well in clutch moments,” said Schmidt.”There was one at the start of the season in Edinburgh that he didn’t nail. (But) there was a drop goal at the end in Sale and a clutch kick in Clermont

“That’s given us a degree of confidence in him that he can do that for us.

“His (kicking) percentages since Christmas are very strong. Based on that we have confidence that he will kick well.”

In short, Schmidt feels Keatley is mature enough to handle the pressure of test rugby. That, clearly, takes time.