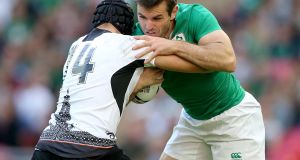 Jared Payne felt like the obvious player to watch considering the amount of ball Ireland would have to fling wide to ensure a bonus point.

Two turnovers, nine tackles and 12 carries is about the norm for this fundamentally sound yet increasingly valuable outside centre (hence he was whipped off before the hour mark).

There was also Simon Zebo to consider. The antithesis of Rob Kearney at fullback but what Ireland lose in aerial dominance – one high ball bounced off Zebo’s chest – they gain in that brilliant, right-handed 20 metre pass for Keith Earls’ first try.

Joe Schmidt was vague about the injury that ended Kearney’s try-scoring impact after seven minutes but, when pressed, the coach said: “Through his glute and his hip, it might have been when his knee hit the ground or the acceleration he felt. He jarred himself up a bit. We will be able to give you a better picture tomorrow or the next day. He’s icing his glute and hopefully is going to be okay.”

Watching Payne also meant Earls or Tommy Bowe were constantly in the corner of the eye. Like they are for Payne. Both wingers sparkled, Bowe for endeavour and fielding those kick passes, but Earls was fantastic – climbing high, offloading and finishing at pace.

But the telescope was trained on the cleverest of naturalised Kiwi recruits. Payne never quits. Pick any phase of play and there he is tackling, rapidly regaining his feet, rucking or sprinting back into the midfield.

On nine minutes he gave up a penalty. “Don’t fall on the wrong side in the first place,” chided Craig Joubert after he combined with Zebo to down fullback Catalin Fercu. It seemed harsh but the knock-on effect, just like when he gifted DTH van der Merwe that try last week, was a flick into turbo mode.

An angry Payne is a focused Payne. He would have been bulling some more after Darren Cave’s hospital pass gifted three Romanians his rib cage two minutes later.

Next he initiated the Simon Zebo try that never was, carrying off the Cork man’s pass, offloading to Jordi Murphy.

No matter. After more brilliance from Earls, catching Eoin Reddan’s box-kick before an offload put the equally excellent Chris Henry rumbling infield, Payne’s catch and pass looked simple; but if it was simple Ireland wouldn’t be picking a New Zealander at number 13.

They need him now. Earls and Luke Fitzgerald can play outside at a push, Cave and Robbie Henshaw too, but that’s the point; at a push.

“He does his basics extremely well,” said Eoin Reddan. “That’s what you have to do in this team.”

Just see Payne’s contributions from 21 to 27 minutes: Tackle in midfield, up quickly back into position. Tackle off ruck. Takes a heavy man-and-ball hit from Romania lock Ovidiu Tonita but is already calling to Joubert before he crashes into the ground. Ball goes loose as Joubert gives Ireland the penalty for offside.

Next play he has to check from an Ian Madigan pass so, surrounded by Romanians, chips to the right corner flag. Overcooks it (a repetitive flaw if we were to nit-pick). Ireland had the advantage anyway, and he knew this. Chases and nails Fercu. Again, like honey.

Cleans a ruck, gets up, back in the line where he finds Henry with the reverse pass. That eventually ends up with Zebo flinging that perfect cut-out pass for Earls’ first try. This Zebo guy might not be such a liability after all.

But Payne is a model of consistency. His steal on 47 minutes was his best work. Textbook tackle, release, grip, rip, present to Reddan.

One more carry up the narrow side and Joe Schmidt had seen enough.Payne, the specialist, the natural operator, has to be wearing 13.

1 Ken Early: Liverpool fans, Bamber Gascoigne and a close shave in Istanbul
2 The Offload: Philip Browne’s grave outlook should be taken seriously
3 As news gets better, can the pull of The Field be resisted?
4 Could Disney World be the NBA’s knight in shining armour?
5 Tiger shines and Brady bites back as charity match proves an enjoyable release
Real news has value SUBSCRIBE