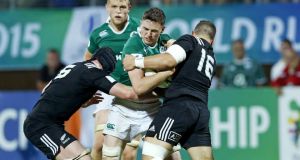 squad have put the disappointment of the New Zealand loss behind them and are now determined to claim fifth place in the World Rugby Under-20 Championship in Italy.

Murphy takes over the captaincy from Nick McCarthy following the scrum-half’s injury in the 25-3 loss to the Baby Blacks, becoming the third squad member to have his tournament end prematurely.

Enniscorthy native Murphy will skipper an Irish side for the first time this evening when they take on Wales in Viadana in the semi-final of the battle for fifth place; Australia and Scotland will meet in the other side of the draw.

Murphy, who spent the first 12 years of his life in Enniscorthy before moving to Dublin to attend St Michael’s College, says the players have had little time to dwell on the loss to New Zealand.

“It was very disappointing on the night, but the next day, the next morning, we did our video review straight away,” says the UCD medical student who is in the Leinster academy.

“There are a lot of things to improve on, a lot of things we did well, and straight on to the Wales game. We saw in the Six Nations that they’re a very big side, probably bigger than New Zealand, but that doesn’t faze us. We got a bit pushed around by them in the Six Nations and lost quite a few points there, but I think we’ve changed since then and we’re ready for them.”

Coach Nigel Carolan has made five changes from the New Zealand game as Ireland bid to gain revenge for a 19-12 Six Nations loss to Wales.

Charlie Rock starts at scrum-half in place of McCarthy, with the returning Ciaran Gaffney taking over from Billy Dardis at full-back.

Stephen Fitzgerald also returns on the right wing for Jack Owens, while there are two changes up front. Nick Timoney takes over from Lorcan Dow at No 8, while Conor Oliver comes in for Rory Moloney at openside flanker.