Simon Easterby refused to be drawn into the choke tackle debate, as Healy and Zebo are relishing facing the English team on Sunday. Video: Daniel O'Connor 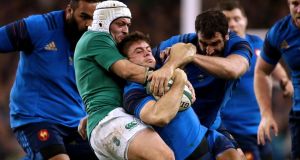 A narrative is all rugby journalists seek on the week of a Test match. A constant now, concussion had a brief run with Mike Brown until England’s fullback failed to complete stage three (running drills that don’t lead to headaches) whereas Tommy O’Donnell, reportedly, remains on course to complete the return to play protocols.

“The choke tackle is very, very dangerous,” he said. “It encourages people to tackle high. Everyone is going on about concussions and people tackling too high. I think referees should referee it as a tackle for longer, but to me, it’s a blight on the game.”

The timing of his comments can be perceived as mischievous. Ireland and more recently England have embraced the standing up of a ball carrier, surrounding him, holding him tight while imploring the referee to declare a maul.

“Does anyone here think it adds to the game in any way, shape or form?” Edwards asked. “Do any of you think it makes the game more exciting? What happens after a choke tackle?”

The rules clearly state the defending side is awarded the scrum. It hurt Wales already this season.

“Billy Twlevetrees won a huge penalty at the end of the Wales game from the same tactic,” said Graham Rowntree, the England forwards coach.

“We encourage our guys – you can choke but do it appropriately, at the right time. If you do it at the wrong time you lose momentum. Sometimes you just got to tackle the bugger. Put him on the floor.”

Paul O’Connell, now famously, joined Chris Henry and Devin Toner to wrap up Sebastien Vahaamahina in the last play of the 2014 Six Nations. “Maul,” roared Steve Walsh through the din. Down they all fell.

James Haskell has made it an important part of his arsenal but not, he insisted, in the same pre-planned way that Ireland do.

“The Irish guys were certainly doing it before 2011,” said the Wasps captain. “It’s not something that I ever focused being good at. My focus was always leg tackling – I came out of the Joe Worsley school of [chop] tackling. I learnt a lot from him and that’s what I want to do. If you hit someone high and someone else hits them low and there’s an opportunity to hold them up, you have to do it. It’s not a skill I look to use, I’d much rather be a leg tackler and destructive tackler.

“Andy Farrell is defence coach and he never talks about using it. Graham Rowntree never encourages us to do it.

“It’s worked well for me at Wasps because if someone runs into Andy Goode and he keeps him up, I’m the next man in and it’s a simple way of doing it,” Haskell added.

“I know Shaun Edwards has come out saying it should be banned, but while it’s a rule it’s a rule. I don’t think it’s a game -changer and it won’t decide Sunday’s game. But it is a useful tool and while it is a rule you have to be good at it.

“Shaun’s entitled to his opinion. I have the utmost respect for him because he knows exactly what he’s talking about. I don’t really have an opinion on it.”

“It’s a type of tackle that teams are using,” said Easterby. “Just like a chop tackle is. Just like an assist tackle. But I would prefer not to comment on what Shaun Edwards has said. That’s outside of this environment.

“We’ve got to play within the law and if we play with discipline and within the law then that’s all we can ask of our players and what we will coach time and time again.”

Because it works. Even Mathieu Bastareaud got choked into submission in Dublin with Jonathan Sexton’s eighth-minute grab and lock.

So, do Ireland play dangerous rugby, like Edwards suggested, Easterby was asked.

“I don’t really want to comment on it,” he answered.

Do Ireland go to Cardiff on March 14th? Yes. Steve Walsh is the referee.

Will Ireland employ the choke tackle then and against England on Sunday? As Haskell and Easterby noted, it’s well within their right to do so.

All part of this year’s intriguing narrative.