Ireland will not be dragged into sideshow, says Rory Best 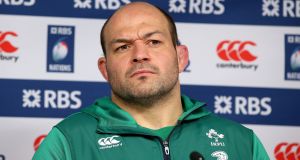 Rory Best: ‘Johnny Sexton doesn’t need an arm put around him. He’s a big boy – he can deal with it.’ Photograph: Dan Sheridan/Inpho

Rory Best, now bedded in as Ireland captain, flicks his buffalo tail in ceremonial protest when asked to talk with us about such matters as Eddie Jones mischievously wondering aloud about the whipped neck of Johnny Sexton. We come with smiling faces, starting slowly, by asking “Rory” how he avoids being dragged into this distracting sideshow that has been bubbling away since Thursday.

“It’s not that difficult because when you’ve been around a bit and had different experiences you know that all that matters is the rugby.”

Perfect answer, Rory. “Rest, recover, train,” he adds. Yes, of course, yes, these are important aspects of the preamble to a test match at Twickenham, but surely the sideshow, what everyone else is concerned about, seeps into gladiatorial minds?

“Obviously. It’s a very big world now right on your doorstep so you do hear snippets and bits like that. It’s something that we’ve always tried not to be drawn into, it’s not the way we go about our business.

Good man, Rory. But come on, mind games are all part of the preparation now, no?

“It seems to be as time goes on, more and more people are trying to start these type of gamesmanships.”

“Obviously for me I would never question a coach of Eddie Jones’s experience and capabilities and that’s for them, that’s how they deal with it. We’ll deal with it differently. That’s the way we want to deal with it ourselves and we’ll do our homework on England. ”

The players can take it, we know, we know, but what leaves a taste in their mouth is the impact all this chatter has on their loved ones. And it got personal this week when Jones nudged the conversation towards Johnny Sexton’s parents, right?

“I think if I put an arm around Johnny he’d definitely be wondering what’s wrong. Johnny’s a very, very strong personality. He’s got an unbelievable will to win and he’s a competitor. He doesn’t need an arm put around him. He’s the guy that puts the arm around boys and looks after boys. He’s the gauge of where our standards are because he expects the highest of standards.

“He’s a big boy, he can deal with it and obviously family is very very important to him and I’m sure he’s been talking to them but in terms of an arm around Johnny, he’s the life and soul of not just our senior player group but our collective. I think everyone knows, whatever team you play in, you support and look after your outhalf and it’s no different with us and Johnny.

“If you need any extra motivation other than playing for your country at Twickenham, for me you’re in the wrong changing-room anyway.”