Ireland Under-20s: James Ryan to lead from front against Wales 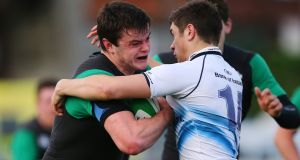 Ireland Under-20 James Ryan in action against a Leinster Development side. Photograph: Cathal Noonan/Inpho

The cyclical nature of underage rugby is illustrated by comparing last year’s Ireland Under-20 team, celebrated for the calibre of their backs, and the present side, where the strength initially lies in the pack.

If Ireland were a tad underpowered up front last season, or perhaps more accurately didn’t have the depth to sustain a challenge through a physically punishing Six Nations and age-grade World Championship, this year’s crop of forwards have more ballast.

Ireland coach Nigel Carolan has elected to play Cillian Gallagher, normally a lock, at blindside flanker, something that should provide an obvious benefit in the set-pieces, and can call upon a frontrow of Andrew Porter, Adam McBurney and Conan O’Donnell that saw game time last season.

The pack and the team will be led by the precociously talented secondrow James Ryan, a son of former Lansdowne and Leinster openside, Mark. Ryan captained the Irish Schools, as well as Leinster’s under-18, under-19 and under-20 sides.

Ryan is athletic, dynamic, possesses a huge work-rate and is pretty clear on the areas of his game on which he needs to focus. “I think the fundamental parts of the game, like set-piece. I’ve got to be a decent lineout player and work on my scrum profile.

“Around the park, I think the best secondrows are guys like Eben Etzebeth and Courtney Lawes, they all have great work rates and cover a lot of ground, put in a lot of tackles, hit a lot of rucks. Then you want to have that bit of athleticism, add a bit of ball-carrying to your game ideally. That’s the areas I focus on.”

He’s also played a little bit for Lansdowne in the Ulster Bank League, underpinning his mobility by lining out in the backrow. “It does help a bit. Obviously the backrow is different to the secondrow, in that you get a bit more freedom to roam.

“There’s probably a bit more donkey work in the secondrow, so it does help in ball-carrying and that kind of thing. But I don’t think they’re that different.”

UCD loosehead prop Porter is another with an impressive skill-set and good speed, while O’Donnell, one of three Sligo club players in the squad, has Pro12 experience this season.

Johnny McPhillips played most of his school’s rugby at Sedbergh as a fullback but links up with Cork Constitution scrumhalf John Poland at halfback. Jimmy O’Brien is a gifted footballer and he links with the strong-running Shane Daly in the centre, while there’s plenty of ability in the back three.

Ulster’s Jacob Stockdale plays for his province in a Pro12 match, while Sam Arnold is still recovering from a hamstring injury: both lined out for Ireland at this level last season.

Ireland have only beaten Wales once in the five most recent meetings in all competitions and the visitors can call upon seven returning players.

Owen Watkin, Dillon Lewis, Adam Beard and Tom Phillips, who were all key players in last season’s Wales Under-20 side, have also had significant regional game time this season.

Since taking over as head coach at the start of last season, Carolan has encouraged his teams to play a heads-up, attacking brand of rugby, and on a fast track in Donnybrook – with hopefully two well-supported teams – it should be an entertaining affair.

Ireland haven’t lost successive home matches since 2011 – they were narrowly beaten by England at tonight’s venue last season in their final home match of the campaign – a record they won’t want to break.