Ireland knew path to victory was to keep attacking All Blacks 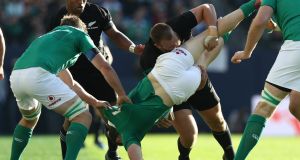 When Ireland went in at half-time with a 25-8 lead, it equalled the biggest half-time deficit the All Blacks had ever known. The vast majority of a largely green-clad 62,300 capacity crowd roared its approval as Ireland marched confidently off the pitch, having thoroughly outplayed the almighty All Blacks. And yet.

Not an Irish man or woman alive would have contemplated counting even one chicken. History had taught us that much. Three Novembers ago a raucous Aviva Stadium had throbbed as Ireland vibrantly roared into a 19-0 lead, which became 22-7 at half-time.

Then though, Ireland didn’t register a solitary point in the second half and, despite some magnificent defending and a few unrewarded sorties upfield, ultimately suffered a heartbreaking 24-22 with the last play of the game.

This time, they resolved, would be different. “We’re not going to sit back and defend. We keep attacking them.” Led by Joe Schmidt and Johnny Sexton, that was the mantra at half-time. True to their word, Ireland tagged on two more tries and 15 points in the second half. That was the difference.

In sport, bravery comes in many forms, but to keep playing with ambition, especially against imposing opposition that trimmed a 30-8 deficit to 33-29, is as courageous as any amount of body-on-the-line tackling.

Injuries hit the All Blacks hard, but noting that flanker Ardie Savea had to be employed as an emergency wing, Ireland attacked his wing ruthlessly, going wide to Simon Zebo, whose perfectly weighted crosskick saw Conor Murray hound Julian Savea into touch-in-goal. 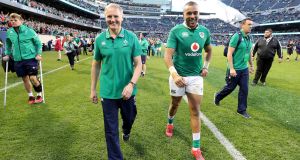 From there, Jamie Heaslip charged off the base of a scrum and worked a switch with the outstanding Robbie Henshaw.

It was a move which had been earmarked for the first test in South Africa, but until this point there hadn’t been a scrum from the requisite position from which to try it. Henshaw’s finish was the highlight of a wonderfully combative and muscular performance.

“It was smart play, and credit to them,” said a gracious Steve Hansen. “We haven’t got any excuses. We were beaten by the better side on the day.

“That was a brave effort to get back to 33-29, and in the end, it was one step too far. Ireland were outstanding and thoroughly deserved the win. It makes up for the last one, which they should’ve won. Full credit to Ireland, and I hope they fully enjoy their victory.”

It was entirely fitting too that Henshaw should effectively seal the win. After being beaten by Waisake Naholo for the George Moala try which gave the All Blacks the lead for the only time in the match and for all of six minutes, no one took the game to the All Blacks with more gusto than Henshaw.

Appropriately also, it was the foot soldiers who drew the lines in the sand, for this win was underscored by the huge work rate of the tight five and the setpiece platform they set with an awesome back-row, which was not diminished by Josh van der Flier replacing the injured Jordi Murphy before the half-hour mark.

Rory Best’s leadership was on the money all the way through, and the decision-making with Sexton and co to continually go up the line reflected the team’s positivity and ambition. With Sexton extracting every metre out of every penalty to touch, this was rewarded handsomely with, in effect, three of their five tries, thus becoming only the sixth team in history to put 40 points on the All Blacks.

Heaslip was immense, as was CJ Stander, who was the team’s leading tackler and, of course, go-to ball carrier, on a day which meant so much to him and the rest of the Munster contingent.

For once it was Ireland who drew every bit as much emotional energy from their response to the haka, with the Munster players to the front of the human “8” they adopted as a mark of respect to Anthony Foley.

Behind a superior pack, Murray dominated the game more than any other player, and with this performance cemented his status as assuredly Ireland’s greatest ever scrum-half, coming up with big plays, distributing and kicking adroitly. Sexton was Sexton, assured in everything he did, and Schmidt was entirely vindicated in his faith in Rob Kearney. And though living off slim enough rations, Zebo and Andrew Trimble had big impacts on the game.

There’s little doubt that, as Schmidt said, the All Blacks were a little underpowered in the secondrow, as reflected in their loss of five line-outs. They also weren’t quite themselves, notably Aaron Smith, who was uncharacteristically unsure at the base. He was outplayed by Murray and hauled off after a missed tackle for TJ Perenara to spark their comeback.

But this time, Ireland weren’t for letting go. An outstanding collective effort by the squad en bloc, adhering to the processes laid out by an exceptional coach. A long time coming, and it should have come sooner, but finally it happened.