As the Irish and Welsh fans start to pour into the Millennium stadium opnions are divided on who will come out victorious. Video: Daniel O'Connor 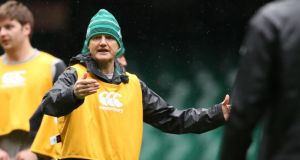 Ireland coach Joe Schmidt puts his side through their paces during the Captain’s Run at the Millennium Stadium ahead of the Six Nations clash with Wales on Saturday. Photograph: Billy Stickland/Inpho

In the red corner, a wounded home team with a proven pedigree in this competition in recent times, who are drinking at the last-chance saloon. In the green corner, a winning team one step away from history and a shot at a Grand Slam, who will be led out by an iconic, inspiring figure in his 100th test for his country. Something has to give between the last two winners of the Six Nations, and of one thing we can be sure, nothing will be given easily. Inches indeed.

Familiarity has bred a rich rivalry in recent times, with both being led by the last two Lions captains and both being bulk suppliers to the last Lions tour. (Thirteen of these Welshmen and nine of the Irish squad took part in the successful Australian odyssey two summers ago.)

At their helm are two ultra-smart coaching tickets, each headed by winning Kiwis, and not the least intriguing aspect of this potentially tumultuous collision will be the degree to which either team might outsmart the other.

Wales are growing into this competition as they generally do in either the Six Nations or the World Cup. Semi-finalists at the World Cup four seasons ago, and Six Nations champions in the ensuing two years, last season wouldn’t have been the first time bulk suppliers to a Lions tour suffered a hangover. They have not lost two home games in the same campaign since 2003, although, coincidentally, the last time they lost a round-four game in Cardiff was to Ireland in 2003.

Ireland have a fair idea of what to expect, from the first play. For Mathieu Bastareaud, read Jamie Roberts, who, along with George North, will no doubt be sent charging down Jonathan Sexton’s channel at the first available opportunity and plenty of times thereafter. The vibe from the Welsh media yesterday reaffirmed that this will be a favoured ploy.

With Roberts and North being launched up the middle, and Taulupe Faletau and co around the corners, they are the ultimate gain-line team, from where they will start applying width to potentially devastating effect. Admittedly, with Seán O’Brien and Robbie Henshaw either side of Sexton, Ireland look well equipped to meet the onslaught head-on.

Thus, even if Ireland build up early scoreboard pressure as in their previous three games, Wales look more capable of coming back. Whether or not Ireland are able to remains unproven.

Wales will expect plenty in the way of an aerial bombardment from Conor Murray and Sexton for Ireland’s five-strong phalanx of fullbacks to contest. The presence of Liam Williams instead of Alex Cuthbert ensures that Wales are better equipped to cope with this.

It will be fascinating to see if Wales push up as hard on the outside as they’ve done previously. Ireland may no longer have Brian O’Driscoll’s playmaking skills, but they have smart players, none smarter than Murray and Sexton, to find those gaps. But it could be that the Welsh wingers or Leigh Halfpenny hold back, affording more space, and thus buck the trend of the games so far.

There have been few pre-match grenades from either camp, it being left instead to the embers being stoked from outside. But Paul O’Connell’s respect for Gatland yesterday was palpable. Citing how the Wasps team which beat Munster in the 2003 Heineken Cup semi-final was ahead of its time, he added: “It was the same when we were on the Lions in 2009. We tried to bring so many of the things that he had in the set-up there back to Ireland and back to Munster. His record is incredible, it speaks for itself. He’s a terrific coach, a great guy, a very clever coach, and kind of like Joe, a little bit ahead of his time. I’ve incredible respect for him.”

Then there is the Wayne Barnes factor, for there is no getting away from it. Although Ireland won with Barnes as referee at home to France in round two, the way he penalised Ireland at scrum time, and 11 times in all, revived memories of that 13-4 penalty count in Ireland’s Slam finale of 2009 at this very stadium.

However, Ireland’s scrum has been going well, and their front-row back-up and their bench suggest they can finish this game strongly. At a ground where Ireland have only lost twice since 1983, and which has provided so many happy Irish memories, they will almost certainly need to, and, in Sexton, they have the man to do so. Forecast: Ireland to win.