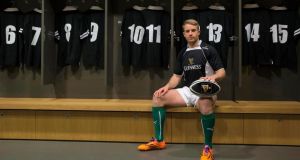 Luke Fitzgerald at the launch of the Guinness Plus App yesterday in the Aviva Stadium. Photograph: Billy Stickland/Inpho

Not unlike Luke Fitzgerald’s career to date, a large chunk of yesterday’s sitting was taken up cataloguing war wounds.

“They don’t get me to do talks about rugby anymore, just about injuries,” he said of a recent visit to the Santry Sports Clinic to lecture “about ACL injuries to physios and doctors”.

“They were asking about the mental side of rehabilitation.”

Of this he knows too much for a man aged 26.

The would-be, could-be successor to Brian O’Driscoll, in both blue and green, has lingered on such thoughts for hours upon unwanted hours.

Guinea pig
He has become the ideal guinea pig, really. Child prodigy, snapped up by Leinster straight out of school in 2006, capped by Eddie O’Sullivan at 19, Lions Test winger by 21.

But also never been to a world cup, butchered by two cruciate tears and a neck problem that contributed to the IRFU retracting a contract offer in March 2012 (he is still only on a Leinster deal).

The fourth coming has proved an instant success and left wing looks almost certain to be filled by Fitzgerald when Joe Schmidt announces the Ireland team to face Scotland on Friday.

Fitzgerald’s candid 35-minute interview with the daily media yesterday began with a tip of the hat to his prematurely retired team-mate Eoin O’Malley’s new venture (a pub on Dublin’s Dawson Street) before showering praise on Brian O’Driscoll. For his off-field guidance.

It’s no great secret that Rob Penney tried to tempt Fitzgerald south last year. “I thought he was a really nice guy and it seemed like he had a bit of a vision going forward. I think you can see that now.

“I talked to Brian, on my dad’s recommendation. He is a smart guy, who has managed himself really well. His advice was really surprising. He was really unbiased on why I should stay (with Leinster). He was really honest. For a guy who has been at the club a really long time it would be easy to get caught up in the blue army thing but he didn’t.”

a mute partner in Ikon management, who just negotiated the most valuable contract in Irish rugby history for Jamie Heaslip.

We kept coming back to the issue of injuries and whether it’s about a lack of access to iron-pumping as teenagers or simply bad luck. Or both.

“I’ve thought about that and how guys progress from their last two years in school and what they’re focusing on in terms of exercises and things. I would say you can probably prevent a couple of injuries that a lot of those guys have had.

“The neck thing was a degenerative thing. I’d say I could have prevented it. That’s where you get into a discussion of what kinds of exercises guys are doing. You look at all the kids today and they’re huge. But can he stand 10 games in a row?”

Fitzgerald’s neck problems showed him the bright lights of retirement. He turned away.

“At the end it was the doctor who said to me, ‘Look, it’s an increased risk on a negligible risk’. “There was definitely a mental hurdle to jump there. I suppose it was down to that unfulfilled part of my mind, where I felt like I wanted to come back. All those kinds of things come into play and I feel like I’m justified in this point of time having come back. There was some serious risk involved in coming back.”

Not that he wants to dwell on such moments. He was in fine form yesterday, even addressing a criticism consistently hurled at him by the untrained eye. That he is too good sometimes.

“People would say ‘over-running’, I’d say yeah, that’s definitely right, I definitely did that quite a bit.

Hard to stop
“And I suppose I’ve tried to be more of an option for longer because I feel once I have the ball I’m going to be hard to stop.

“I can come off either foot, I can get stronger in the upper body and I can hand off as well and brush out of tackles a bit more this year which has helped me as well.”

One day he may even play at the world cup.