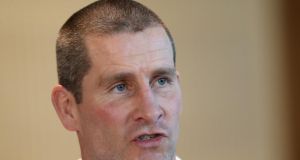 Stuart Lancaster is preparing England to face the RBS 6 Nations’ most complete side when Ireland visit Twickenham on Saturday week.

Paul O’Connell’s men have swept aside Scotland and Wales to retain hope of completing the Grand Slam, with France the tournament’s only other unbeaten team.

Lancaster admires an experienced starting XV packed full of British and Irish Lions that he believes is well coached.

“Ireland are becoming the most complete the side, definitely, because they’ve clearly improved in their forward play,” England’s head coach said.

“John Plumtree is their new forwards’ coach and you can see the improvements they’ve made in that area. Their mauling game, as we saw against Wales, was excellent, so technically they’re very good.

“They’re very good at the breakdown, which is another element of John Plumtree’s role. And Joe Schmidt is a very good head coach who understands the different strategies needed to win games.

“Ireland have kicked the ball probably double the amount of times they did during the autumn internationals. They manage the tactical game very well. The third part of the equation is the quality of players they have.

“There were over 700 caps in their team and you only have to look at how many British Lions they have. It’s a pretty good side all round at the moment.”

Lancaster confirmed that wing Marland Yarde, centre Manu Tuilagi and fullback Ben Foden were close to making returns for their clubs after lengthy spells in the treatment room.