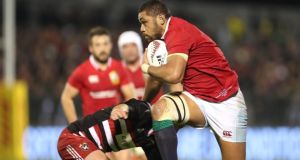 Taulupe Faletau was one of the few standout performers in the Lions’ narrow opening win over the New Zealand Barbarians. Photograph: David Davies/PA

Stuart Hogg - Linking up well and going forward he looked dangerous as he always does, but too many errors laced the first half and he butchered a try scoring pass to Watson. 4

Anthony Watson - Took his try well in a game where he didn’t get the space he would have liked. Took Farrell’s flat pass and also had to side step a defender to score. That’s what he’s there for. 7

Jonathan Joseph - Didn’t see a lot of ball but kept himself busy in defence. He was outshined by Te’o beside him and will have left the pitch frustrated with his low impact. 5

Ben Te’o - Was one of the strongest runners and did it almost every chance he got. Made hard yards as Leinster fans saw him do so often although he was sometimes isolated for the next phase. 8

Tommy Seymour - Came off his wing into the line well and looked like one of the few threats in the first half. He also added a try saving tackle on the hour, which could have killed off the Lions. 6

Johnny Sexton - A match he needed to control and show that his form has improved didn’t work out. The perfectionist needs to calibrate his game in kicking and passing departments. 4

Greig Laidlaw - He looked a little soft in the tackle for the Baa-Baa’s try and didn’t have the go forward instincts of Webb when he came on. Would have hoped for more game influence. 5

Joe Marler - The scrum was solid but he wasn’t visible in the first half in loose play. A lot of tackling and although the set piece was strong props need to give more these days. 5

Rory Best - The Irish hooker is normally a good ball carrier and makes an impact around the park with turnovers and big tackles. Made 11 tackles and lineout good. A decent shift. 6

Kyle Sinckler - Took his opportunity with both hands and was the pick of the frontrow. Overzealous at times but game to take on the ball and his energy shone through. 7

Alun Wyn Jones - One of the leaders in the side but put in a workman like shift more than one that inspired. Did the grunt work and maybe gets a pass for injury return. 5

Iain Henderson - Missed a tackle on 10 minutes but showed soft hands with a pass to Sinckler which almost ended with a try. He won’t be happy with his go forward impact. 5

Ross Moriarty - Possibly the Lions best player. His work rate was high and he took on the ball throughout, a lot of them heavy carries through tackles. Showed spark and willingness. 8

Sam Warburton - There was a statistic midway through the second half that showed the BaaBaa’s had more turnovers. That’s Warburton’s department. Some big carries but can do better. 5

Taulupe Faletau - Another of the players that stood out. His wide channel carries, work rate and on 18 minutes a cracking try saving tackle after a 50 metres run to make it. Good start. 8

Subs - Three of the replacements made an impact, which is what they’re expected to do. Owen Farrell’s flat pass to Watson triggered the try and changed the tempo, while Mako Vunipola made a try-saving intervention with a fewminutes to play, stopping a rolling maul at the end. Tipuric also showed when he came on for Warburton with energetic defensive work.

Coach - Warren Gatland - what can a coach do? Make changes. And his worked, with Farrell Tipuric and Vunipola having an impact. They also won the match despite playing badly. 7