Anthony Foley has been in Munster senior rugby for over 20 years, does he have Munster’s confidence? Yes or no? 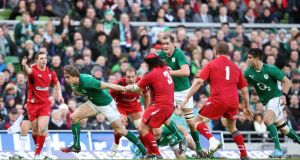 Ireland’s Andrew Trimble breaks the tackle of Wales’ Adam Jones at the Aviva Stadium last Saturday. In Trimble Ireland have a player revelling in confidence that has transformed his international game. Photograph: Inpho

What a week it’s been. At one stage I was sitting in Killaloe aboard a 21-foot gaff-rigged Valk boat, furiously bailing storm rain water into the bulging river Shannon. While topping up the Shannon, Mary, our office manager, phoned to tell me “there’s no need to panic, but”. I kid you not, while I was refilling the Shannon in Killaloe, my office 22 miles south in Limerick City was being swamped by the very same river. Am I the master of my downfall?

The Limerick Boat Club roof has departed and so too many sporting fields and fixtures. There’s a great picture “floating” around of the club, being bashed by the Shannon, roof off, with Thomond Park in the distance, like so many of Limerick’s people, standing tall, proud and unshaken.

Yesterday I was bumper to bumper in traffic in the heavily waterlogged “Isle” when my car alighted just short of St Mary’s Church, right outside The Triple Crown pub which was formerly owned by legend Ginger McLoughlin. His outrageous try in Twickenham while carrying the English pack came “flooding” into mind.

My thoughts on England, Irish props and Triple Crowns will have to wait till next Friday as with all the flooding, Rob Penney’s news has somewhat slid under the bridge.

Questions
I have two questions; both to the Munster Professional Games Committee (MPGC). Why did you select Penney in the first place (was he the best man for the job and if so please explain why he is now departing). And secondly, while managing massive upheaval in personnel and having brought Munster to the top of the Rabo and into the Heineken Cup play-offs two seasons running, why are you de facto letting him go?

In US professional sport the group tasked with selection of the key coach are expected to conduct due diligence before nomination. If it turns out be a short stint, justification is required. Or to quote the Munster CEO referring to the upcoming appointment in the Limerick Post, “ You have to get the best person for the job and if we didn’t appoint the best person for the job, we’d be criticised”. Less than two seasons have past. That of course could be best for all concerned but if they really wanted him would they, like any top player, have tied him in to a longer contract to dissuaded any potential approaches from abroad.

Munster’s finances are troubling, with a totally new coaching ticket expensive. Is the new man to be a co-ordinator manager (Declan Kidney type) with a requirement for multiple technical coaches, or a hands-on technical coach (Joe Schmidt type). If it is the former then he can drive the tactics, techniques and talent which will relieve financial pressures on having to build the requisite team of coaches around a more traditional manager type. What is the MPGC looking for?

My final question is much simpler.

If Anthony Foley is the next man, the best man for the job why does it take a month to ratify the appointment? Talk of receiving CVs from impressive candidates is fine and dandy but is Foley to be subjected to “sure if you’re the best man you’ll get it, but let’s wait and see who else is looking”.


‘Controllables’
Sport has always taught me to “control the controllables” where one announcement could have been followed quickly by another; our new coach. Due diligence – Foley’s been in Munster senior rugby for over 20 years, does he have Munster’s confidence? Yes or no?

Confidence was the main winner last week where the obvious vote of confidence I referred to on Monday was with Dan Tuohy’s early arrival at the Aviva replacing the “irreplaceable” Paul O’Connell. This will send surges of confidence around the greater squad – “the coach believes in me”. Not to mention Jack McGrath and Marty Moore guiding the scrum home with a wing forward in the “row”.

Confidence goes much farther and when O’Connell smashed British & Irish Lion Dan Lydiate in the opening salvo to gain a turnover on Wales’ 10th phase he powered quickly off the line in full confidence that his team-mates inside were switched on sufficiently for him to trust and focus totally on the hit. This he did. Lydiate felt it and Wales were stunted and never really recovered.

Our extremely talented players in the past rarely had that total trust in their 23-man team to rely on when the pressure spiked. Time spent half guessing about team mates, is time wasted.

Clearly that’s where this team are heading and in Tuohy, Moore and McGrath amongst others they have men slotting in but it is in Andrew Trimble Ireland have a player revelling in confidence that has transformed his international game.

Watching his physical application was enthralling where the obvious stuff was exactly that, obvious!

But the speed with which he covered the ground to seal a breakdown or, better still, flatten a prowling Welsh man to secure our ball was most impressive. It is a tough decision to make at that speed especially as a winger’s less accustomed to the breakdown. In those fleeting moments of Test rugby Trimble was technically spot-on when answering the question; should I stay, or should I go?! I hope my sandbag wall holds.