Heyneke Meyer plots downfall of ‘best team of all time’ 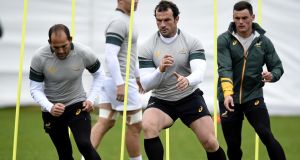 Heyneke Meyer is old school. He exudes passion for the game in all of his lengthy, meandering thoughts, and cherishes rugby’s “ethos” – one of his favourite words – such as sharing mutual respect and then a beer after the game, a ritual he admits to sharing with his All Blacks counterpart Steve Hansen.

They also share texts before and after games. Asked about these surprisingly convivial rituals – one ventures this mightn’t always have the been the case between head coaches of rugby’s ultimate Test rivalry – Meyer said: “I don’t want to go into too much detail because it’s between us.”

Whereupon, the engaging Springboks head coach did precisely that, dating the friendship back to his first encounter and defeat to Hansen’s All Blacks, in Dunedin in the 2012 Rugby Championship.

“I was very down, he came over – and I think that’s great about rugby – and brought me a beer. “He said ‘listen, I know how you feel, I know the pressure on you, just have a beer with me’. And I really respect that.

“The second game we played away was very close and we lost that game as well, and he came looking for me with another beer afterwards. He gave it to me and we started talking about his family, and his wife, and we know we’re under the same pressure. We’re proud countries.

“He’s got to know my family I’ve got to know his family. I don’t usually meet up with coaches before games, but there’s so much respect and I’ve said to him ‘Steve, you know what, I can’t wait for the first day I can bring you the beer’, because the winning coach always brings the beer.

“At Ellis Park it was only the once,” Meyer said with a rueful smile in reference to South Africa’s 27-25 win in October last year, their sole win over the All Blacks in seven meetings as rival coaches.

“What I really respect about Steve is that after the game he took it like a man, and said ‘I’m waiting for that beer’. So we’ve got a tradition and hopefully on Saturday I can give him a case of beers.”

Discussing the mutual respect between the two teams, Meyer added: “Although there’s huge competition and no inch given on the field, that’s what’s great about the game. You would think I would sit here and bad-mouth them and try to get into their heads and things, but you won’t see that from us or from them.”

In light of their record in the last four years against these All Blacks, it’s little wonder Meyer was not inclined toward hyperbole when he said: “I really mean this: I really believe this is the best team that has ever played the game.

“If you look at the last four years, after a World Cup usually there’s a decline in performance, but they’ve just got better, which just hasn’t happened in world rugby. We know this must be our best performance probably ever to beat them, because I do believe they are the best team ever to play the game. In saying that, you have to believe you can beat them.”

To that end, as expected, Meyer has named an unchanged side from that which beat Wales, with the 38-year-old Victor Matfield, who has not played since South Africa’s win over Samoa in their second game because of a recurring hamstring problem, recalled to a bench that Meyer describes as the best he’s ever picked. That Matfield cannot force his way back into the team is due to the form of Eben Etzebeth and Lood de Jager. Similarly, the Springboks have found their best midfield, in the shape of Damian de Allende and Jesse Kriel, due to the unfortunate way Jean de Villiers’s World Cup and Test career ended.

Indeed, in many ways they have slightly stumbled upon their best team and it’s interesting to note that only eight of the side that lost their opening match to Japan will start Saturday’s semi-final at Twickenham. The return to the side of Duane Vermeulen and Fourie du Preez as the 8/9 axis has been critical, with these two wily operators the architects of the late match-winning try over Wales.

Those two have taken over ownership of the team after Meyer looked almost on the point of a nervous breakdown in the fallout of that defeat to Japan. Having lived on the edge for four ‘knockout’ wins since then, Meyer and the Springboks look notably more relaxed this week. In some respects, the pressure is off to a degree. They have achieved their basic target of reaching the semi-finals, and for the first time go into a game in this World Cup as underdogs.

Another inspiring figure has been Schalk Burger, one of eight veterans in this side from their last World Cup semi-final in 2007. During 2013, Burger contracted a hospital bug which resulted in bacterial meningitis after an operation to remove a cyst from his spinal cord, and there were fears for his life.

“I still can’t work him out,” admitted Meyer good-naturedly. “He’s an amazing human being. If you check what he’s been through, for him just to be alive is great. He just enjoys life. I’m a bit more uptight at times and he’s more relaxed. You need that balance. He always has time for a joke. He’s still smiling before we go into battle, but when he gets on the field he’s a different human being.

“The way he came back, he really inspired the rest of the team. He puts the guys at ease. If I ask the guy why he plays rugby, he says it’s just to have a beer with his mates.”

Athletics Ireland confirm nine sessions for National Championships 18:02
Trump prefers Jordan to James because ‘he wasn’t political’ 16:45
Mark Selby books semi-final spot after crisis of confidence 13:09
Galgorm Castle resort could rescue 2020 Irish Open 11:25
Iain Henderson out for up to 10 weeks after hip surgery 10:26
Crossword Get access to over 6,000 interactive crosswords