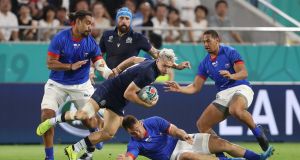 Darcy Graham is the only Scotland player to retain their place in the starting XV for their clash with Russia. Photograph: David Davies/PA

Gregor Townsend’s eyes turned to a likely quarter-final decider against Japan on Sunday with the selection of his Scotland team to play Russia in their Pool A clash in Shizuoka on Wednesday.

Scotland need to beat both Russia and the tournament hosts with a four-try bonus point to ensure they qualify out of the pool, where they are likely to face either South Africa or New Zealand.

Townsend made 14 changes to his side that got their World Cup campaign back on track with a 34-0 win over Samoa last week after they were humiliated by Ireland in their opening game.

Darcy Graham is the only player retained from the starting side to face Russia, although he has switched from the right to the left wing.

“We have got Japan in the back of our minds,” Townsend said on Monday. “At the front of our minds is the Russia game.

“We need to win and to get a bonus point, otherwise we are going home.”

Townsend said they had been impressed with a Russian side that was improving throughout the tournament and had a strong defence and solid set piece.

They also impressed with the way they frustrated Ireland, who only managed to secure a bonus point with their fourth try in the final quarter.

“The scrum is solid, one of the best in the tournament and their tighthead has been one of the top players,” Townsend added.

“We are expecting as good a performance as they gave against Ireland, but another level up.”