England sweating over the fitness of Billy Vunipola 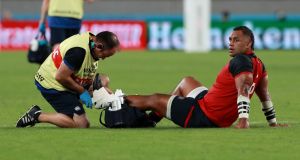 England are still sweating on the fitness of Billy Vunipola after the No 8 suffered a twisted ankle against Argentina on Saturday. Vunipola has had a scan on his left ankle but is set for further assessment before England determine whether he is fit to face France this weekend and play any further part in the tournament.

Vunipola sustained the injury during the first half of England’s 39-10 victory over the Pumas, which confirmed their place in the quarter-finals. He played on until half-time with his ankle heavily strapped but did not re-emerge for the second half. He was replaced by Lewis Ludlam, with Tom Curry moving to No 8.

Eddie Jones is expected to make a number of changes to his side to face France with England’s place in the last eight already assured, but if Vunipola is ruled out of the knockout stages it would be a huge blow. England have considerable depth in terms of ball-carriers with Mako Vunipola back to full fitness and Kyle Sinckler, Manu Tuilagi and Maro Itoje all fit and available but Billy Vunipola is the only specialist No 8 in the squad.

“He has had a scan and that is ongoing, and we will have a clearer picture tomorrow,” said the England assistant coach, Neal Hatley. “He is being assessed and that will go on throughout the day and we will see how he pulls up. He has another 24 hours and then we will make a firm diagnosis. He is walking around with a smile on his face. We will know a lot more on Tuesday and he did have a scan as a precaution.”

England are confident however, that they could cope with the potential loss of Billy Vunipola, who has started their last 12 Tests – seven of which have come in the last two months. Hatley added: “We plan for all eventualities and with what we have got with Ellis Genge, Mako Vunipola, Maro Itoje, Courtney Lawes and Kyle Sinckler people pick up the slack when Mako and Billy don’t play. We have played a lot of rugby without them. Billy is an important figure for us, but other people pick up the slack.”

Jamie George, meanwhile, revealed that Jones warned his side that they had to take on added responsibility in the second half against Argentina with Billy Vunipola absent. “Eddie made us aware of it when Billy came off at half-time,” he said. “He said there will be potentially be a little more responsibility for the other guys to step up and want the ball now. You work towards the ball all the time anyway. If he does or he doesn’t play then we’re all aware that we need to get our hands on the ball and impose ourselves physically.”

Hatley delivered a more bullish update on Joe Marler, who was able to train on Monday despite a back problem. Marler has started all three of England’s matches to date so may well make way for Mako Vunipola against France. “He has done training this morning and he has played a lot of rugby for us and it’s a position we have good strength in, and we will see how he pulls up to make sure we put out the strongest team possible,” said Hatley. “There is a little bit of referral in his back and we will see how he is tomorrow.” - Guardian