Finn Russell ruled out of Scotland’s trip to Paris 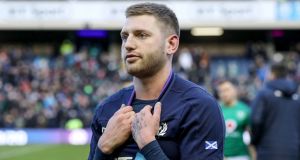 Finn Russell has been ruled out of Scotland’s clash with France. Photograph: Dan Sheridan/Inpho

Scotland have suffered yet another major injury blow after Finn Russell was ruled out of Saturday’s Six Nations clash with France.

The Racing 92 outhalf had given Scotland a glimmer of hope he could recover from a weekend head injury when he arrived symptom-free in Edinburgh on Monday and observed a light training session from the sidelines.

But his chances quickly evaporated.

A statement from the Scottish Rugby Union on Tuesday morning read: “The 26-year-old playmaker has not satisfied the requirements of today’s component of the graduated return to play protocol — two days on from sustaining the injury in Racing 92’s Top 14 clash with Toulouse — meaning there is insufficient time for him to be considered for this weekend’s action.

“He will now return to the care of his club’s medical team.”

Scotland had been hit by a host of injuries before the tournament started and are now without six of the players who started their opening win over Italy.

Stuart Hogg, Huw Jones and Russell are sidelined in the back division along with Ryan Wilson, Sam Skinner and WP Nel from their pack.

Their frustrations will be exacerbated by the fact that Russell started a Top 14 game in Paris six days before he was due to play there for his country.

Head coach Gregor Townsend called up Worcester’s Duncan Weir as cover for Russell on Monday and his options for the number 10 jersey also include Glasgow pair Adam Hastings and Peter Horne.