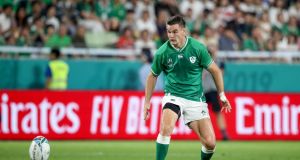 Ireland’s utter reliance on Johnny Sexton is a conundrum for 2020. It is Andy Farrell’s problem ahead of next season’s Six Nations. Right now, right here, he simply must be on the pitch at all times.

Everyone saw the obvious. Ireland’s momentum stalled as soon as he departed at half time against Russia.It was strange that he didn’t finish the job. Secure the bonus point, and then allow Jack Carty close the show without any pressure. Carty, to be fair, got there in the end, but there is no escaping Ireland’s over-reliance on Sexton now.

On the teams Brian O’Driscoll captained he could lean on Ronan O’Gara and Paul O’Connell to lead and control the tempo at different moments (and Johnny after Rog). Brian could just focus on playing outside centre or he could take a much needed breather, all the while safe in the knowledge that Paulie and Rog/Sexton would march the team down field. Then O’Driscoll could spring to life.

Sexton doesn’t have that luxury at the World Cup. He is Ireland’s judge, jury and executioner. Rory Best continues to do a fine job communicating with the officials, but his primary job is to keep a brand new lineout functional (the Springbok jumpers looked like they were on top of ladders against Italy).

Best needs to focus on his individual performance as a priority. Same goes for Peter O’Mahony. Bashed up in two games, and having started three, the Munster captain can only keep battling away.There is little scope for strategising his way through the coming weeks.

That leaves almost all the emphasis on Sexton to run the game. To lead Ireland. There is no hiding from this. If able Sexton needs to play every minute against Samoa until the bonus point is secured. Then he will be needed for every second of the quarter-final.

I heard Joe Schmidt saying he will play 40 or maybe 60 minutes against Samoa. That was the plan, but the plan has been ripped up after defeat to Japan. Johnny has to play as much as is needed because he’s the only player capable of managing Samoa. And they need to be handled in a very specific way.

Japan showed how to beat them. It was clinical, avoiding the collisions whenever possible, seek out the space, don’t enter the confrontational zones where a Pacific Islands team are matched by few.

If Ireland play how they did against Scotland we can scratch off another five players before the knockouts stages. It would be 2015 all over again. No bodies.

Can Johnny do this?

If Sexton plays 80 minutes four times over the next three weeks then other players will climb up alongside the standard he sets. Garry Ringrose has been superb for three full matches. He needs a rest or he’ll be broken.

If Ireland keep going the lineout will have become a work of art. Jacob Stockdale and Keith Earls will be mentioned in the same breath as Cheslin Kolbe.

We need to start seeing all this on Saturday. Ideally, 50 minutes is all it takes to put Samoa away. If so get Sexton off or support him with Joey Carbery, giving Ireland a new [exciting] attacking dimension.

It doesn’t matter where Joey plays. But Ireland need him on the field. I see Rog talking about using him at 12. That’s never happened before. It’s not a bad idea but anywhere will do, and alongside Sexton would produce something no opposition is ready for.

Johnny does not need to prove his worth in the contact battle over the coming four games.

Yes, I am still talking about going all the way because we still don’t know what the future holds. Sexton putting his body on the line means he cannot orchestrate the attack. That’s a sacrifice for others – like Best and O’Mahony – to embrace.

I remember being on a pitch in Barnhall RFC playing some pre-season touch rugby. I was holding the shortside with not a huge amount on. Johnny arrived as second receiver and injected pace into the attack, screaming at me for a second touch. That is the usual from him, at his inspirational best when combining with all sorts of different players. We need his body to hold up.

Ireland need Sexton to get their belief levels back to where they once were. Sexton is the catalyst for everyone else to perform to their potential.

I desperately want to believe reports that Robbie Henshaw and Carbery are fit and ready to go. If it proves to be fake news, well, I just don’t see the point in such media messaging.

Honesty is always the easiest policy. Steve Hansen has proven this on multiple occasions. A man goes down hurt, take Brodie Retallick’s shoulder injury last July, and the New Zealand head coach cuts through any conjecture: we are bringing Brodie to the World Cup despite the injury. He’ll be back for the quarters. Retallick reappears ahead of schedule against Namibia the other night and the impact is pure positive. Brodie’s back. When he was gone nobody was wondering about him. It didn’t fester.

With Ireland we are never really sure who is playing and for what reason, or whether the information we are being told is accurate.

Players are sitting in front of microphones saying they are fully fit to play and togging for the cameras at training when they know full well they are not going to be included in the match-day squad. Because they are injured. The opposition are not being fooled. Nobody is.

So I hope Henshaw and Carbery are fit because they represent two bright candles in the storm. Josh van der Flier and Henshaw leading the line, tackling high (up the line not the head) like they did against Wales, makes the Ireland defence look like it is being coached by Andy Farrell.

News flash: Ireland need to score tries this weekend. Four tries will not be created by one out-runner around the ruck. We could take a leaf out of Japan’s play book and kick to win back possession, play pressure rugby and avoid an arm wrestle with a team build to eviscerate static runners off the scrumhalf.

Defences are waiting for Ireland – looking to bury CJ Stander, Cian Healy and James Ryan. It has become far too predictable.

The key to an effective attack is to get set before the defence can. As Geordie Murphy used to always say “chat on the run”, arrive and go. Sexton and Carbery are experts at this. Against Samoa it is vital that decoy runners fix blue jerseys so the sprinters can be put into space.

Ireland like to build play for five, six phases, but if just one player numbers up wrong the entire plan can disintegrate. This happened a lot during the early weeks of Schmidt’s time at Leinster, and we are seeing the same mistakes again. Against Japan players went to rucks to be safe, secure the ball. The knock-on effect left numbers short elsewhere. That means the multi-phase attack malfunctions.

When opportunities did arise players made bad decisions with ball in hand or the numbers just weren’t where they needed to be. This is fixable. When Sexton plays those initial three, four phases off set-piece they are crisper and space does appear.

Mid-tournament who are the most impressive teams? Japan deserve enormous credit for how they are bringing their wingers into play all the time. South Africa look awesome, and are priming themselves for the knockout stages. They didn’t lose any sleep after losing to New Zealand.

England look strong, as ever, but the reaction on All Black faces after giving up a try to Namibia proves they are different gravy. To a man they were devastated.

This is a group of men who can cope with being the best team on the planet. They think about the game differently to everyone else. Imagine taking the best outhalf in the sport and turning him into a 15. And it working! The Beauden Barrett switch will probably win them the World Cup.

England have problems with Billy Vunipola’s ankle, and this shows Ireland are not alone in this regard, because this one injury can knock Eddie Jones’s best laid plans off course. The fact they finished against Argentina with Owen Farrell at 10 and Henry Slade at 12 is the “Billy isn’t fit, we might not get quick ball” backline.

This was meant to be the most open World Cup ever. New Zealand didn’t get the memo.