Johnny Sexton’s brilliance followed the correct decisions made under pressure 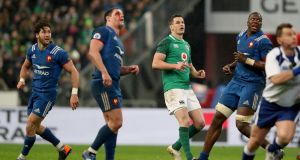 Johnny Sexton stood above the entire stadium and identified a way to cover the crucial 15 metres Ireland needed to reach the edge of his range to kick the drop-goal. Photograph: Dan Sheridan/Sheridan

France didn’t lose the game in Paris, Ireland won it. Both teams can take solace from that.

The French were miserly in defence, yet the greasy surface – so difficult to produce creative rugby on – was a genuine reason why the Irish attack didn’t come close to scoring tries.

As happens in the Six Nations the event became a story in itself.

The Teddy Thomas try brought matters down to the base level of sports psychology: a battle of wills.

The Grand Slam was not in any players’ head (although it was on the line). Winning the title did not matter (even though it did).

It becomes about making the correct decisions under pressure. This is when Johnny gets better, this we all know

In those injury-time seconds – the accuracy of each ruck, carry, pass and drop goal – the Joe Schmidt-way was perfectly captured.

Ireland and Johnny Sexton have existed in that space many times over the past five years. They all know a process-driven attitude will put them into a position to win any game.

So it becomes about making the correct decisions under pressure.

This is when Johnny gets better, this we all know.

I see no other way that Ireland could have won last Saturday’s game than an individual moment of brilliance. The cross field kick for Keith Earls and the last two carries by Iain Henderson and CJ Stander put Sexton in the best position he deemed we were going to get.

Now, the All Blacks, and their attacking ways, would probably have given Beauden Barrett a 25-metre drop goal. Or, as we saw at the Aviva in 2013 and 2016, they would conjure up magic in the wide channels to finish with an unstoppable try.

But forget about them.

What would England have done?

The exact same. Plough it up, retain possession, until Owen Farrell had a 45-metre look at the posts.

Does Owen get it? England will eventually be asked that question.

There wasn’t much chance of a late penalty off Nigel Owens – even with Sébastien Vahaamahina lying over both John Ryan and the ball for seven seconds in the 81st minute – and France knew this. They also realised Ireland wouldn’t, couldn’t, play high risk rugby and that the winning score had to be created inside their own half in optimal conditions for defending.

Johnny stood above the entire stadium and identified a way to cover the crucial 15 metres Ireland needed to reach the edge of his range.

Earls was screaming for the ball. The kick pass is not high risk to Johnny. To me and you it is, but not to this calibre of outhalf.

It’s all about doing the basics well. The Schmidt-way in one phase of play. Johnny kicked into the space. To him, I presume, it was the logical option to take. Viri Vakatawa couldn’t jump or cut the legs off Earls, allowing Keith to land and scramble into their territory.

The drop goal that followed launches what, hopefully, ends as a magnificent Six Nations for Ireland.

The Monday morning review will not have spent much time dealing with the Thomas try. Plenty of people at fault. Plenty of credit goes to Anthony Belleau and Antonie Dupont for playing the way French halfbacks must when a game needs winning.

Jacob Stockdale, to my mind, is absolved of any wrongdoing. He’s beaten by the angle and Thomas’s pace after the actual damage is done.

It looked like he positioned himself for the chip.

Rob Kearney found touch near the French 10 metre line. Conor Murray rushed up in an attempt to stymie the quick lineout – taken by Belleau – but got stepped by the nimble Dupont. That’s when the try was created because the defensive line behind Murray fractured and never recovered.

A breakdown in communication meant Kearney is caught in a two-on-one situation that afforded Thomas space in the five-metre channel.

The five defenders – Rob, Bundee Aki and frontrow replacements (Seán Cronin, John Ryan and Jack McGrath) – did not come up in a flat line.

Aki was behind the other four, who were too narrow anyway, and a step behind them. Also, somebody needed to be Rob’s eyes and ears by pushing him across to cover the touchline.

If everyone shifted over, Aki gets done by the Belleau two-on-one but Kearney puts Thomas into touch.

Defence in rugby is all about talking to those either side of you.

I’m guessing at what was said by Joe in Carton House: “Conor, if you rush up you must make a tackle.” (In fairness, Murray forced Dupont towards the touchline.)

To the players building the line behind, he would highlight the importance of holding shape (they have worked on this a thousand times).

With 71 minutes played, presumably, Aki was blowing hard and simply lost concentration. A split second is all it takes and they were unable to reset the spacing.

An old rule of thumb for defending the 15-metre channel is to have two defenders in between the five and 15 and one sitting in the five-metre channel who could use his angles and the touchline if needed.

No one person deserves the blame for this try.

Next time the frontrowers will take control by readjusting Aki and Kearney. Problem averted.

What came next – France chancing their arm with the Dupont HIA (which is being investigated) to get Maxime Machenaud back on and then forcing a scrum penalty out of Ireland – seemed to have the game going the usual way in Paris: a brave yet flawed Irish defeat.

That is until Sexton, Murray and a well-drilled pack of forwards intervened.

The result puts Ireland’s place in the world order into some context.

We looked superb beating very poor South African and Argentinean sides at home in November. Now we have won by two points in Paris against a marginally improved France.

Wales and Scotland will both have identified areas to attack in Dublin. Victory at Twickenham will still require a monumental effort and plenty of lucky breaks.

Not losing last Saturday keeps the squad on course for the medium-term goal: win the championship.

Italy looked a good team for 55 minutes against England in Rome. It took that long to put them away. That makes team selection more difficult for Schmidt. The Ireland halfbacks just combined for 80 minutes but can we risk benching either of them?

Much like the Ulster problems, there is no silver bullet to solve the problems of Italian rugby. That’s why they turned to Conor O’Shea, a proven coach when it comes to succession planning and delivering results.

I never really came through the structures as I went onto a full Leinster contract out of school but Steve still had an influence on my development.

Treviso’s performance level this season is no spike, it’s a trend and Aboud’s fingerprints are all over it.

The tactics and shape we saw against England last weekend – wingers running inside and outside the outhalf, short Rugby League plays out the back – were being coached into Irish teenagers in the late 1990s.

The fundamentals will be drilled into the next generation of Azzurri and he will challenge them in an abrasive, and positive manner. Ying to O’Shea’s Yang.

I’ve written before about Conor’s influence on me as his 19-year-old understudy at the 1999 World Cup. I was never coerced into doing extra kicking after training but at the time it felt like it was my idea.

That’s the best trait a coach can possess: giving people ownership of the work they are doing to become better players.

Rugby is a really false environment in that you feel like you have control over what is happening. But everything has to be planned well in advance. O’Shea makes people feel like they are part of the decision making process, rather than replaceable cogs in a wheel.

Not unlike Joe. They’re different in the sense that Schmidt seems to be more hands-on when it comes to coaching the minutiae of a session. Conor’s strength in this regard is to bring in brilliant rugby minds like Brendan Venter and Wayne Smith.

It requires a particular character to put superior technical experts around you. Italy’s long term goals might never include a Grand Slam or World Cup semi-final. For Conor, it could simply be about turning them into a sustainable, competitive rugby nation. From top to bottom.

O’Shea and Aboud are well qualified to attempt this enormous task.

Dublin and Schmidt’s Ireland should prove an unforgiving experience on that journey but what O’Shea’s Italy attempt to achieve on Saturday will be very interesting.

1 Golf in Level 5 Covid restrictions: Clubs still waiting to hear if they can remain open
2 Johnny Sexton: ‘It hurts more when you are captain’
3 2020 All-Ireland Senior Hurling Championship key dates
4 On healing and wild hurling: The re-education of Diarmuid Lyng
5 The Offload: Spectre of doping hangs heavy over South African rugby
Real news has value SUBSCRIBE