George North to feature in warm-up games for Wales 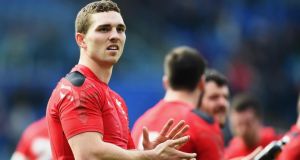 The Lions wing has taken part in Wales’s training camps in Switzerland and Qatar this month. The emphasis was more on conditioning than rugby, but when the squad, which returned from Doha on Wednesday, regathers on Sunday evening, the focus will be on the first of the warm-up matches, against Ireland in Cardiff the following Saturday.

“We are conscious of the knocks that kept him out of rugby,” said the Wales coach Warren Gatland, “and we have not done much contact in training so far. George has trained well and is looking good. He is in great shape and although a young guy, he has a lot of experience.”

Gatland said that the tighthead prop Samson Lee, who had an Achilles tendon operation towards the end of last season, remains a doubt to make the 31-strong World Cup squad, which will be announced on 31 August while the full-back Liam Williams is unlikely to play in any of the three warm-up games because of a foot injury.

“Samson is doing pretty well but it is tough and go for him in terms of making the World Cup squad,” said Gatland. “We may have to take him as an injured player and hope that he is fit to play in the second or third match. Liam is unlikely to play in any of the warm-up games.”

One player who is fit is the No8 Taulupe Faletau, whose planned move from Newport Gwent Dragons to Bath has been thwarted by Gatland. The two sides had agreed a fee and the Lions’ forward wanted to join last season’s beaten Premiership finalists, but the Wales head coach blocked the transfer in the interests of the national team.

“The agreement we have with the regions allows dispensation for two players on new contracts who are based outside Wales,” said Gatland.

“We are limited in what we can do in Wales, unlike England, because of our limited playing base and we only have four professional teams. I wanted to make sure that the players were protected in the agreement: I want to make sure they are not taken advantage of and lowballed on salaries because they want to pay for Wales.”