England hit by injury crisis in advance of France clash 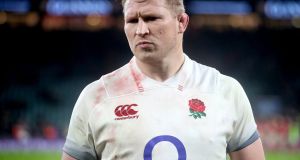 Dylan Hartley: looks set to miss the game against France due to a calf injury. Photograph: Adam Davy/PA

England have been hit by several injury problems before their clash against France on Saturday, with doubts over Dylan Hartley’s fitness chief among them.

The captain has a tight calf and will be continually assessed before Eddie Jones names his team on Thursday, but his absence would be a considerable blow for England, with Sam Underhill and Jack Nowell already ruled out.

Underhill and Nowell have been hit by toe and ankle injuries respectively, while Harry Williams (neck) is also a doubt. Underhill’s absence is keenly felt, as the 21-year-old was tipped to come into the starting XV. But Hartley’s injury will be of particular concern, with Jones steadfastly backing his under-fire captain as England seek to bounce back from their defeat against Scotland, only their second in 26 Tests.

His injury is serious enough that Luke Cowan-Dickie has been called up from Exeter, with Jamie George standing by to start if Hartley is ruled out. He did not take part in training yesterday, meaning Jones will name his team to face France before Hartley has the opportunity to train alongside the rest of the squad again.

“Dylan has muscle tightness in his leg and that has meant that Luke Cowan-Dickie was called up to the squad [on Monday] and trained fully [on Tuesday] morning as cover,” the England forwards coach, Steve Borthwick, said.

“We have the two hookers and we need the third hooker as cover. Dylan will be monitored on a daily basis and we’ll see how that progresses. We’ve got various mechanisms with which to do it and the medical staff advise on a daily basis.”

Lawrence Dallaglio was among the former England players to question Hartley’s captaincy following the defeat by Scotland, in part because he is habitually withdrawn from the pitch before the hour. But Jones has only once omitted him from a Test starting lineup – against Samoa in the autumn – and before the news of his injury emerged he stated that Hartley would remain in the role in Paris.

Owen Farrell assumes the captaincy when Hartley is taken off but, against Samoa, Chris Robshaw and George Ford were made co-captains, with the Saracens playmaker rested. “We’ve got players in the team who have captained England before, we’ve got co-captains,” Borthwick said.

Both Underhill and Nowell sustained their injuries at Saturday’s training session at Twickenham. England are hopeful Underhill will return in time to face Ireland on Saturday week, but Nowell is set to miss the rest of the Championship.

Borthwick said: “Our training is appropriate. Nowell rolled an ankle he had already injured – that can happen – and [Sam’s] toe got trod on. These things happen.”

Underhill’s absence means Jones’s options when it comes to making changes to a back row that was outgunned by Scotland at the breakdown are limited. The Bath flanker is the closest Jones has to a classic openside flanker, but his short England career has been blighted by injury and he has therefore been unable to stake a sustained claim for the number seven jersey.

The return to fitness of Sam Simmonds, who played the last half-hour of Exeter’s win over Saracens on Sunday, is therefore timely, while James Haskell is also under consideration, having been named in a 27-man squad last night. Elliot Daly, fit again after ankle and calf injuries, is set to take Nowell’s place in the match-day 23.

Kyle Sinckler and Cowan-Dickie are in the squad as cover for Williams and Hartley respectively, while Zach Mercer, having played for Bath against Harlequins on Sunday, misses out after reporting to training with an injury.