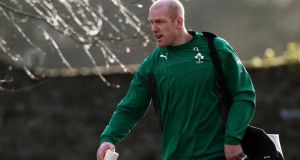 Ireland captain Paul O’Connell will lead his country against Wales in the Six Nations Championship match at the Aviva stadium on Saturday.

The Munster and Lions secondrow missed the victory over the Scots after withdrawing on the day of the match with a chest infection. He returns in place of Dan Tuohy – who had a superb game last Sunday – who drops to the bench with Iain Henderson slipping out of the match day squad. O’Connell will take over the captaincy from Jamie Heaslip, who led the side in the Munster man’s absence.

D’Arcy, who missed a little training the previous week, a contributory factor in his omission against the Scots, replaces Luke Marshall with the young Ulster centre not included in the match day squad. The reunion of Ireland’s premier midfield pairing – they play together for the 53rd time – should enhance the midfield defence.

That is an important consideration when facing the in-form Welsh midfield axis of Jamie Roberts and Scott Williams, who combined for one of their team’s tries the last day. It should be noted that Marshall performed very capably the last day but the intuitive understanding that D’Arcy and O’Driscoll have built for province and country is an appreciable asset.

D’Arcy was also outstanding against the All Blacks and he knows Roberts and the Welshman’s qualities inside out.

O’Connell, meanwhile, admitted he was embarrassed by his last-minute withdrawal from the game against Scotland.

The Ireland captain trained fully on Thursday after completing a course of antibiotics and revealed he has played through similar remedies with no ill effects in the past.

O’Connell admitted he has taken a fair amount of stick from former Ireland team-mates for being laid low last week.

“I’ve just got a little bit of a cough left, that’s all,” said the 34-year-old. “It’s a bit embarrassing really: I’ve copped plenty of slagging from the old-school players I’ve played with for years.

“I’ve just finished a course of antibiotics, I’m finishing them today. I’ve played matches on them before, so I don’t struggle with it at all.

“You almost wish you’d had something worse than a chest infection.

“I’m experienced enough to know how to handle things like this, I’ve dealt with similar things before.

“I broke ribs against England, and had to withdraw late the next week from a game against Italy.

“It was very frustrating and very disappointing then, and the same last weekend.

“I’ve worked hard to get into a position where I could play in the Six Nations, so to miss out on the first game was frustrating and disappointing.

“But I think you have to have respect for your team-mates as well, particularly the secondrow, Dan Tuohy has been playing great this season, and Iain Henderson had been in camp all week.

“And I really didn’t think it would affect the team in a big way, and I thought I might write myself off for this week if I did play.”

Ireland head coach Joe Schmidt does not expect any similar last-minute dramas with his captain this weekend.

“If we get through Saturday morning with him he’ll be fit and ready to go!” joked Schmidt.

“He trained fully on Thursday and I’m confident there will be no late changes to that this time around. As soon as I saw the name on my phone on Sunday I knew something was up.

“The doctor doesn’t ring at eight in the morning to ask if I want to go for a coffee.”

Schmidt also confirmed that loosehead prop Cian Healy has made a full recovery from the ankle knock suffered against Scotland.

He also revealed that the six-day turnaround between the opening two games has meant training has been unusually light given the bruising nature of the Scotland victory.

“We did half an hour on Tuesday, an hour on Thursday, and that’s pretty much it with the captain’s run on Friday too,” he said.

“Those first three days post match it’s vitally important to get a full recovery. I’m certainly hoping to see it starting to build on Friday.”

Meanwhile, Schmidt believes the O’Driscoll-Warren Gatland circus is a “non-issue” ahead of this weekend.

Gatland was pilloried from many posts after omitting O’Driscoll from the Lions’ decisive final Test in Australia in the summer.

“Certainly the match and a good performance is far more important for Brian and everyone internally,” said Schmidt.

“It’s a non-issue for us to be honest. It’s something that happened over the summer, there’s a lot of water under the bridge since then.

“It’s just about trying to get as well prepared as we can be in the windows that we’ve had.”