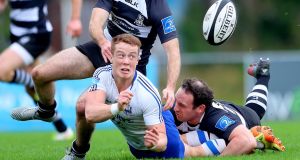 Munster Academy starlet Shane Daly crossed for one try and set up another as Cork Constitution continued their impressive form with a 24-17 win over Clontarf.

Despite first-half tries from brothers Matt and Adrian D’Arcy, off-colour champions ’Tarf fell to their fifth defeat in seven games on a day when former Ireland international Joy Neville made history at Temple Hill as the first woman to referee an Ulster Bank League Division 1A fixture.

Garryowen threw off the shackles and ended their run of low-scoring performances with a thrilling 43-38 triumph over St Mary’s College at Dooradoyle. They lifted the Shay Deering trophy in swashbuckling style thanks to a penalty try and six touchdowns from Niall Horan, David Johnston, Liam Coombes, new South African flanker Alwyn van Vuuren, Hugh O’Brien-Cunningham and Elliot Fitzgerald.

Young Munster Young Munster maintained their two-point lead at the top of Division 1A after coming from behind to beat Terenure College 31-23 at Lakelands Park. They sealed the result with scrum half Rob Guerin’s fourth try of the campaign and a late penalty from David O’Mahony, topping up his 11-point haul.

In Division 1B, a lone second half penalty from Kevin O’Keeffe was enough for UCC to claim the scalp of Ballynahinch, winning 15-10 at Ballymacarn ParK. They did most of the damage early on with tries from Cathal Gallagher and Chris McAuliffe.

Dolphin let their boots do the talking as a succession of penalties from Cian McGovern (two) and Cillian Monahan (three) guided them past Naas on a 15-10 scoreline at Irish Independent Park.

Once again Galwegians scored enough tries to win - five in all - but came out on the wrong side of a tight result (35-34) against Ballymena at Crowley Park. Mitch Lam’s 79th-minute penalty had them in a winning position before the four-try Braidmen earned an injury-time scrum penalty which Ritchie McMaster sent through the posts.

Winger Jordan Conroy made it eight tries in six league appearances as he helped leaders Buccaneers overcome Old Wesley 49-22. Former Connacht back Shane Layden captained the Pirates and also touched down as he banished memories of last season’s trip to Donnybrook when he suffered a cruciate injury.