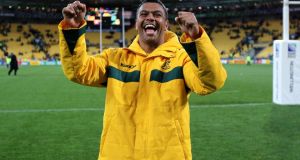 Australia international Kurtley Beale was one of two Melbourne Rebels players sent home from South Africa after an incident on their team bus. Photograph: David Davies/PA

Australia internationals Kurtley Beale and Cooper Vuna have been sent home from South Africa by Super Rugby side Melbourne Rebels and face further sanctions from the Australian Rugby Union (ARU) after an incident on the team bus at the weekend.

The incident came in the wake of a record 64-7 drubbing for the Rebels in their match against South Africa's Sharks in Durban on Saturday and both players were stood down after an club investigation on Sunday.

"The club will not tolerate this type of behaviour and I am embarrassed for everyone associated with building this club," Rebels coach Damian Hill said in a team statement.

Rebels chief executive Steven Boland said the ARU had been consulted as both Beale and Vuna are also centrally contracted by the Wallabies.

"There can be no excuses for the disrespect shown to the Melbourne Rebels Rugby Club by these players," he said.

"The expectation of the club and our supporters is that the management and players in South Africa focus immediately on their task of making amends for the poor on field performance in Durban on Saturday by making us all proud in Bloemfontein next weekend."

Both players are almost certain to miss the match against the Cheetahs next weekend.

Beale, who will be a strong contender for the Wallabies outhalf role for the three Tests against the British and Irish Lions in June and July, is still under a legal cloud after being charged with assault after a fracas at a nightclub last year.

Rugby league convert Vuna made two appearances on the wing for the injury-ravaged Wallabies last year but would be a fringe player at best for the Lions series.

Meanwhile, the ACT Brumbies' unbeaten start to the season came to a shuddering halt at the weekend but another superb display from George Smith will only increase calls for his return to the Wallabies squad for the Lions series.

The 32-year-old openside flanker, who won 110 caps before his international retirement in 2010, was once again outstanding despite the Brumbies' 35-22 Super Rugby defeat at the hands of South Africa's Stormers in Cape Town.

Australia coach Robbie Deans has already ruled out a recall for Smith, saying he was not eligible because of his contract with a Japanese club, but that was before he lost his first-choice number seven David Pocock for the season.

Pocock, one of the world's best flankers, underwent knee reconstruction surgery 10 days ago and ARU chief Bill Pulver said he was expecting a call from the Kiwi coach about Smith.

"Given David Pocock's situation, I'd expect Robbie Deans would be eager to make inquiries," Pulver told Monday's The Australian newspaper.

Should Deans make the request and the bureaucratic hurdles be jumped, Smith would be in line to become one of the few players to play against the Lions in two separate series.

In his first season of international rugby, Smith played all three Tests on the 2001 Lions tour, when Australia came from a match down to win the series.

The dreadlocks that once made Smith such a distinctive figure on the pitch have long gone but he has shown for the Brumbies this season that he remains a significant force at the breakdown.

Before Pocock's injury, however, openside flanker was one of the few positions where Deans had plenty of options.

Michael Hooper made an impressive entry to the Test arena last year when Pocock was sidelined by an injury to his other knee, while young Queensland Reds flanker Liam Gill also made his international debut last season.