Australia will get close encounter against Scotland but defeat unlikely 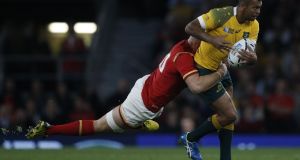 Australia’s outhalf Kurtley Beale in action against Wales. Beale did superbly when coming on as an early replacement against England. Photograph: AFP Photo

The preamble has been dominated by suspensions and injuries. Scotland’s appeal of the three-match bans imposed on hooker Ross Ford and secondrow Jonny Gray – they will be heard at 10am on Saturday – has no relevance to this World Cup quarter-final, unlike Australia’s medical issues.

Fullback Izzy Folau’s rolled ankle and the calf strain suffered by number eight David Pocock enjoyed prominence in the daily bulletins. The initial prognosis was reasonably positive but ultimately misleading as both failed to recover in time.

At face value it is a significant blow to the Wallabies, but in delving beneath the headline news, a slightly less worrying narrative emerges. Folau damaged the joint in the second half of the victory over England and played with the problem against Wales.

Australian coach Michael Cheika said he would have taken off the fullback against the Welsh if the match situation had allowed. Folau limped through the final quarter. Arguably the most gifted athlete in rugby, he hasn’t been the commanding presence aerially and there can be no doubt the ankle has been a factor in that; though he still manages to include snapshots of his footwork and strength.

His replacement Kurtley Beale did superbly when coming on as an early replacement against England and while not as good in the air he is a huge running threat and a good distributer.

Pocock’s absence is partially offset by the return of Michael Hooper from suspension and the performance of Ben McCalman when introduced against Wales, an impact that included a crucial try-saving tackle. The Wallaby backrow has a more orthodox look with the outstanding Scott Fardy a reassuring presence.

The return of Rob Simmons is not a surprise. He is the main lineout guru and it was an area in which the team struggled a little the last day when he started on the bench. The Scots are strong out of touch and it is an area they will target.

Cheika has reiterated the priority is for the players to make incremental improvements every day at training, the preoccupation with fine tuning their own playbook rather than dwelling on the opposition.

For the first time in the tournament though they are down a couple of marquee players but it’s hard to escape the suspicion there wouldn’t have been any complacency anyway.

Scotland coach Vern Cotter has opted for two openside flankers in Blair Cowan and John Hardie in an effort to try to outgun Hooper in Pocock’s absence.

Cotter understands the havoc the Wallabies can wreak off quick ball. “We tried it in the first our warm-up games with Blair at (number) six. We are playing a team that likes front-foot ball and that have been impressive. We hope having two quick guys on the paddock will help us shut them down . . . You have to stop them stringing together phases of play and building momentum.”

Ford and the younger Gray sibling will be a loss but one the Scots can absorb. They were ridiculously porous in defence against Samoa and that will have to improve infinitely. The scrum and breakdown will be two other key areas.

If Scotland can get some traction at the breakdown, it’ll make the game a contest. There will be no sentiment attached to Wallaby captain Stephen Moore and centre Matt Giteau winning their 100th caps.

Australia’s playing veneer has been forged in the fire of a ridiculously tough pool while the Scots offered up the game against South Africa and were nearly caught against Samoa. And yet the Scots have won their last two encounters with Australia. This could be closer than many suspect, and while Scotland do have a chance, anything other than an Aussie win would be a massive surprise.