Australia roll the dice for Bledisloe Cup clash with All Blacks 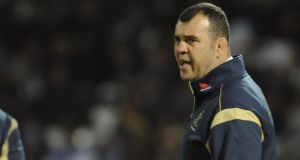 Australia coach Michael Cheika: “They’ve forced my hand to see if it can work. I believe it can.” Photo: Andrew Larrovere/AFP/Getty

Australia have taken a punt on back row pace being a decisive factor when they bid to unseat the champion All Blacks in a blockbuster Rugby Championship decider in Sydney this weekend.

Tomorrow’s match at the Olympic Stadium will not only decide Southern Hemisphere bragging rights for the year but is also the first match in a two-Test Bledisloe Cup series with the return in Auckland next week.

The Wallabies last held the symbol of their trans-Tasman rivalry in 2002 and last beat the All Blacks in 2011 to win the final Tri-Nations, which was also truncated to allow for World Cup preparations.

Australia coach Michael Cheika, looking to make a statement with the World Cup just weeks away, clearly felt the need to try something a little different to break the cycle.

Openside flankers David Pocock and Michael Hooper will play in tandem in the hope of getting quickly around the park from breakdown to breakdown and cutting off Aaron Smith’s supply of front-foot ball.

“The way they’ve both played either as start or off the bench I think they’ve forced my hand to see if it can work,” Cheika said.“I believe it can.”

It was a tactic that worked for South Africa for much of their match against the All Blacks at Ellis Park two weeks ago, even if the world champions, as they so often do, ran out winners with a late try.

“I don’t think you needed to be a rocket scientist to work out he would probably go with that,” Hansen said.

“And whilst that gives them strength in some areas it probably weakens them in others.

“We’ve just got to make sure we take advantage of those weaknesses and make sure that we don’t allow them to have a field day at the breakdown.”

Hansen has gone with tried and tested in his selection, putting out his best available side with a debut for explosive back Nehe Milner-Skudder the only nod to squad rotation.

The All Blacks will be hoping Pocock will not be able to offer the same sort of threat with the ball in hand or in the set piece as a traditional number eight.

Cheika has also benched the hulking Will Skelton and gone with a second row partnership of James Horwill and Dean Mumm to mitigate against the loss of usual lineout caller Rob Simmons, who is out for a month with a wrist injury.

Experience was the watchword for his backline selection too, with centre Matt Giteau and winger Drew Mitchell, both recalled after a change in Australia’s eligibility rules earlier this year, bringing 157 caps to the party.

All Blacks skipper Richie McCaw falls only 17 short of that tally on his own and will equal Brian O’Driscoll’s record of 141 Test appearances tomorrow.

The 34-year-old joins forces in the back row with Kieran Read and Jerome Kaino, and they will be confident of being able to deal with the Hooper-Pocock experiment.

Argentina coach Daniel Hourcade has made 11 changes to his side for tomorrow’s Test against South Africa in Durban as he tries out new combinations before the World Cup.

Experienced flyhalf Juan Martin Hernandez returns for his first Test of 2015, part of a changed backline that has seen only wing Juan Imhoff retain his place from the side that lost 34-9 to the Wallabies in Mendoza last time out in July.