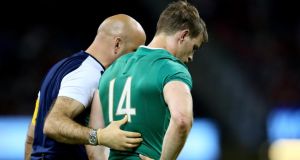 Andrew Trimble has been ruled out of Ireland’s World Cup warm-up game against Scotland at the Aviva Stadium on Saturday. Photograph: Inpho

Marty Moore and Luke Fitzgerald will be available to coach Joe Schmidt ahead of Ireland’s second World Cup warm-up game against Scotland at the Aviva stadium on Saturday.

Andrew Trimble will have a further scan on Wednesday on the foot sprain that forced him off in the first half of the victory over Wales, but regardless of the outcome will miss the clash against Vern Cotter’s side.

Ulster hooker Rob Herring and Leinster centre Noel Reid have been released back to their provinces and they are likely to be joined by another four or five players after the Ireland team to play Scotland is announced at lunch-time on Thursday. Ireland captain Paul O’Connell is fit and available for selection.

The Leinster duo, who both underwent shoulder operations, have comprehensively rehabilitated the injuries and took a full part in training this week. The likelihood is that they will see game time against the Scots.

Ireland skills and kicking coach, Richie Murphy, offered an update on the injured players at Carton House on Tuesday. “There’s no real change since yesterday. Andrew (Trimble) will have a further scan tomorrow and obviously Tommy (O’Donnell) has picked up that injury and will be off his feet for about six weeks. We’ll go from there after that.

Cian Healy continues to make measured progress but there’s still no definitive date for his return to competitive fare. Murphy explained: “There’s no real update on him, he’s progressing well is where he’s at. He trained today, he’s not doing full contact but he’s doing more or less the whole session yesterday and today.

“He’s progressing reasonably well, but it’s a week-to-week basis with him and we just don’t know where he’s going to be at.”

Murphy spoke about the universal regret at the hip dislocation suffered by Tommy O’Donnell, particularly on foot of such an excellent display during his time on the pitch against Wales. He confirmed that no specific cover would be called into the squad, that the resources were adequate even with the Munster man’s loss.

“I haven’t actually been talking to Tommy myself, but it’s a massive blow. He had a great performance at the weekend and definitely was right up there fighting for a place in the squad. For anyone at this stage, after putting in a really gruelling five weeks of training, it’s tough for him to miss out.

“(There’s) probably no need in that position. Obviously it’s one of those positions that we have a lot of really talented players, so it does open up opportunities for other guys. I don’t think we need to look at the squad at the moment.

On the likely composition of the team for the Scottish match, Murphy admitted: “There will be quite a few changes. The guys at the weekend did reasonably well. It’s another opportunity to get more guys onto the pitch over these first two games, so I think you would expect quite a few changes and some guys who haven’t had game time will be coming back in.

“We’ve obviously gone into it (the World Cup warm-up series) with teams in mind, but those teams have changed from week one to week two and they’ll probably change in week three and week four as well.

He admitted that he was largely satisfied with the manner in which Paddy Jackson controlled the game against Wales. “I think Paddy did well. I think he’ll be a bit disappointed that he missed three kicks in the end, especially the first one. I think he was blowing pretty hard when it actually came around, so it’s one of those things.

“First match back, a little bit rusty off the tee but I thought in general his tactical kicking was very good, one or two loose ones, but he can tidy them up and his general play was pretty solid. As for the rest of the guys, I thought we were pretty good without being excellent.

“You have to take into account that we had a pretty inexperienced team out there and Wales had a lot of young players playing. We were probably a little further ahead down the track at that particular point, but come two weeks that will be a different story.”

1 Tianna Bartoletta: ‘After you’ve gotten your medal, you become black in America again’
2 The Irish Times shutdown sports quiz: Part three
3 Betting shops face uncertain future as they prepare for Monday reopening
4 Timo Werner giving up on Liverpool dream on path to being truly wanted
5 Ian O’Riordan: An education in race and running during college days in America
Real news has value SUBSCRIBE