All Blacks to stick with New Zealand based players 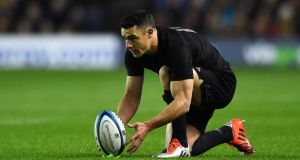 Dan Carter is one of a number of All Blacks who had to return to New Zealand in order to represent the side again. Photograph: Getty

New Zealand have no intention of following Australia’s lead and allowing players based at foreign clubs to play for the All Blacks, rugby chief Steve Tew said on Thursday.

Australia reversed their policy of picking only home-based players for the Wallabies on Wednesday and will now allow internationals who have won 60 caps and played seven years Super Rugby to represent their country while overseas.

That leaves the All Blacks and England as the only teams with policies which exclude players plying their trade abroad and Tew said the New Zealand Rugby Union (NZRU) had no plans to make any changes.

“We are constantly reviewing what we are doing and you never say never, but our policy is that to wear the All Black jersey you have to play your rugby in New Zealand,” Tew told Radio Sport.

“We have treated some players, I guess, with a little bit of flexibility in terms of when they’ve returned to the country when they’ve become eligible.

“But the core policy is if you’re not here you don’t play for us and we think that’s been a very important part of our player retention strategy and there’s no immediate thought of changing that.”

Top All Blacks like flyhalf Dan Carter and centres Ma’a Nonu and Sonny Bill Williams have been allowed stints overseas or in other codes in recent years but immediately returned to the national set-up when they returned.

Australia’s change was a reaction to the increasing number of experienced Wallabies taking up lucrative contracts in Europe and Japan.

As well as retaining the services of experienced internationals, the Australian Rugby Union hopes the policy change will make their players, who have previously been able to dedicate themselves full time to club rugby, less attractive.

While allowing an element of flexibility through short sabbaticals, New Zealand have relied on the lure of the All Blacks jersey as a key plank in their player retention strategy.

“We had quite a long conversation about it around the board table yesterday and we have no intentions of changing that policy.

“But we’re constantly reviewing what we’re doing and if circumstances change we’d be foolish not to think about it. But right now our policy is the policy and that’s the end of it.”