After last week’s effort wouldn’t it be just like Ireland to go off and beat the All Blacks? Eh, no 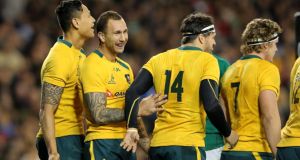 It has been suggested Ireland’s only chance against the All Blacks this Sunday is to play to our traditional strengths ie bringing them out on the lash. But that didn’t really come off against the Aussies did it? Not many teams out-Ireland the Irish on and off the pitch, but by going on the piss off it and then taking the piss on it, they’ve insulted us to the core.

Even the number of Aussie players involved feels like it’s a dig, 15 to be precise, a whole rugby team, maybe eight others tagged along as replacements in case there was a late casualty in Coppers?

You’d have to wonder, on the evidence of last Saturday did it actually happen the other way round? That might explain why Ireland played like Canada with a hangover. Apologies Canada.

But Cooper didn’t need the rest of his band last week, instead he relied on the head-banded duo of Nick Cummins and Michael Hooper who disconcertingly resembled a Wimbledon doubles team from the 1970s and the lads from the 11-8-50 ads. Need a try nifty? Call 11-8-50. It certainly looked that easy.

Playing in the dark
The nonchalance with which the Wallabies scythed through flailing-armed, wrong-footed Irishmen was jaw-dropping. At times it looked like Ireland were playing in the dark. Given the majority of the team (1l) played under Les Kiss’s defensive system in the defeat of the Aussies two years ago, it doesn’t really add up to suggest there are now “teething problems” in the area.

Whatever the warnings were about not kicking badly to Australia’s back three, it’s not New Zealand’s back three we have to worry about, it’s the 12 in front of them.

Yes, this time even the bright side seems quite dark, black . . . All Black.

“It would be just like Ireland to go and beat the All Blacks now,” said a man in a local hostelry after last week’s debacle, a very positive man who was lowering one of many pints of black at the time.

Hold on, of course, it could be worse. We could be down in the dumps after an awful display, have half our team missing through injury and be playing the best team of all time. Eh . . .

But here’s a positive for Ireland – Dan Carter is not playing. Aaron Crudden is a good outhalf, but he’s not Dan Carter; he doesn’t have his running threat, his vision, his passing game or his kicking game. Who does?

There is something extra-terrestrial about Crudden, though; you’d wonder if perhaps Mars has listed him as a missing eh, person? Another positive? Felix Jones has been added to the Ireland squad. He might run like a head-bobbing buckled donkey, but that might just be the ticket against the Kiwis.

Joe Schmidt doesn’t really do emotion, but with the heat turned up a notch or two this week, could it result in our Kiwi coach suffering a momentary loss of plot while rallying the troops?

Careful PR line
Of course the All Blacks have always tread a careful PR line – not wanting to come over all cocky like those “Blaaddy” Aussies, or as stiff as those “Pompous Poms” – they reside somewhere in the middle. Not a pretty place, is it any wonder their coach Steve Hansen often looks like he’s smelling mouldy cheese?

This week they’ve been their customary selves in the build-up. Focused, controlled, calm, professional . . . snooze, sorry, I nodded off there.

Richie McCaw similarly went through the motions during his press duties this week with the usual mix of “Aw, look you never know with the Irish, you’ve always gotta be wary of the Irish, there’s been some tight ones over the years”. Yeah, yeah whatever, thanks, Richie.

It made me wonder, what’s more patronising? McCaw trying to sound modest, or him trying to sound like he’s worried about Ireland? It’s a close call, especially when that word “passion” is used as our only attribute. “Yeah, you know the Irish! Lots of passion” (apart from last week) , “fire in their bellies, lots of Irish spirit and . . . a nd . . . passion”.

Yeah, yeah, we’ll take you on in hurling sometime, let’s see how you like that?!!

Seeing as our Joe is one of them, would it be out of order to ask them if they wouldn’t mind playing in all white this weekend? Preferably with a large English rose on their chest and a Union Jack on their arse. And would a picture of Oliver Cromwell on their backs be pushing it?

The result seems inevitable, but in sport you just never know, and positive thinking is vital to Ireland now, and not the kind which makes us positive we’re going to lose.

1 Gerry Thornley: Wild reactions to this Ireland team as fickle as the wind
2 IRFU not consulted prior to Minister Harris’ recommendation to cancel Ireland v Italy
3 Mayo GAA cut contact with Tim O’Leary after ‘Horan Out’ tweet
4 Cian Healy out of remainder of Six Nations
5 Cheltenham keeping a watching brief on coronavirus
Real news has value SUBSCRIBE