Ian Keatley slowly emerging from the shadow of a legend 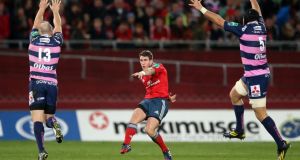 Munster outhalf Ian Keatley in action against Gloucester in the Heineken Cup. “I feel I have to use this year as the year to break through.”

It’s been a circuitous route to being a first-choice provincial outhalf for the Heineken Cup, but Ian Keatley has a fair body of work to his name by now. Career decisions were carefully calculated to take him to this juncture in his career, whether leaving Leinster at 21, or moving on from Connacht to Munster three seasons ago and knowing that he would be operating in the shadow of a legend.

Being understudy to Ronan O’Gara was both difficult and an invaluable learning experience. But Keatley believes he is emerging from the shadow. “I feel I’m a different player from Ronan. Obviously I can take bits of his game and add them to my game, but I’m not trying to be Ronan O’Gara. I’m trying to be Ian Keatley and I’m trying to put my own stamp on Munster rugby with the way I’m playing.”

Keatley knew the score when he first arrived, and watched O’Gara closely. “I was trying to pick apart his game and just trying to learn from him. Maybe in my second year I got out of his shadow a bit. A lot of people around me were saying I was playing better than him but in fairness to Ronan he played very well in the big games and that’s what you have to rely on. Those big games are crucial. I feel I have to use this year as the year to break through.”

In three seasons with Connacht, Keatley played 77 games, scoring 688 points. Despite a couple of seasons behind O’Gara, Keatley has tagged on another 48 appearances for Munster, including nine (five starting) in the Heineken Cup, and has added another 438 points to his name.

First-class games
Keatley has played almost 150 what might be termed first-class games when one takes into account his two caps against the USA and Canada in May 2008, nine appearances for the Wolfhounds and three for Emerging Ireland last summer in Georgia.

“I’ve never had any regrets with what I’ve done in my whole career, even leaving Leinster to go to Connacht. When I did that it was the biggest decision of my life. There have been others who have been in a similar position to me and not left Leinster, when they probably should have, and they’ve struggled, and some of them have retired.”

As much as anything, Keatley observed O’Gara’s mental strength, and game management as well. “I was more of a running player and that’s all I ever really thought about – run, run, run. Just watching him sitting back and control games with his foot. But I’m still 26. I still think I have a few more years in me.”

Aside from being more of a shop window, there is a different buzz about the Heineken Cup, even when walking the streets of Limerick in the build-up to games, although the first time he realised the true importance of the Munster rugby team to the Munster people was for his first Rabo game in the Aviva against Leinster.

“On the bus on the way to the Aviva, there was a garda outside the ground and he just looked at the bus and he clenched his fist and he goes, ‘come on!’.” Keatley smiles at the memory.

More control
He wasn’t inclined to speak up too much in his first season, but this season has been different. He is taking more control and speaking up more. Keatley has, predictably, provided rich material for slagging from Munster team-mates, and as he is living with Andrew Conway and Johnny Murphy, hence it is called ‘the Leinster house’.

“But as Marcus Horan always used to say, if you’re not getting slagged you should be worried!”

The youngest of three to Paul and Barbara, after Derek and Naomi, although there was no rugby in the family bloodline, Keatley couldn’t wait to emulate his older brother by playing under-age rugby in Suttonians, even though this meant a six-year-old playing on the under-9s.

“He was a prop turned wing then went back to prop which is strange, but he was actually a sturdy guy and he was quick, once he caught the ball,” Keatley says with a smile.

By the end of primary Belvedere College took over, and a career highlight remains the 2005 Leinster Schools Cup final win over Blackrock, the school’s first in 33 years, in a team featuring Cian Healy, Paul O’Donohoe and the talented, sadly retired Eoin O’Malley.

“I was with my team-mates for like 10 years. We were very close-knit. In the final I remember the old train tracks were going by outside the old Lansdowne Road dressing-room and the ref delayed the start for five minutes. I was with Mick Cuddy Jr and we were climbing up the walls trying to get out.

“I started getting sick and I remember my first kick-off, I kicked it miles into the stand because I had so much adrenalin. Everyone thought that we just wanted to have a scrum with Blackrock! So I went along with the story but I was just so pumped I kicked it into the stands.

“Back then it meant everything to you, schools rugby.”

Belvedere won 16-10, Keatley kicking what he reckons might still be his only left-footed drop goal. “I missed two or three with my right, and no one remembers that.”

Left-footer
The left-footer was the product of working with the school’s most famous rugby playing alumni, Ollie Campbell. “He came in and said ‘I want you to hit 500 drop goals’. I’d still get texts off him now.”

Recently he did some kicking with a schools player, prompting him to note how times have changed, and now Keatley is the senior half of a new number ‘10’ rivalry with JJ Hanrahan. “People from the outside might think that me and JJ, because we are in the same position, mightn’t get on, but me and JJ go out kicking every day.

It’s a good rivalry for them, for Munster and for Ireland, though this prompts him to note that there were only three Munster players in the Irish 23 against the All Blacks – a far, far cry from much of the Noughties when Munster were Ireland’s bulk suppliers.

It’s little secret that Keatley is fourth in Joe Schmidt’s outhalf pecking order behind Sexton, Paddy Jackson and Ian Madigan. “In fairness to Joe he has kept in touch with me. He has rung me twice, both times when I didn’t get selected for the squad and I asked him questions, ‘what do I need to work on?’

“He pulled out a stat that I had two passes in the Gloucester match just to the back shoulder and I had two kicks against Edinburgh that just went out on the full.”

Keatley explained that they were “the right things to do at the time” but concedes “I just need to concentrate on my own game, make sure that I’m not giving him a reason not to pick me”.

He believes he has a good kicking game, a good running game and a good passing game, and it’s about doing the right things at the right times instinctively. “That’s when things will start clicking and I don’t think I’m that far off it. I think I’m really getting close.”

This is Munster in microcosm. Win the next seven and it’ll be harder for Schmidt to ignore their credentials individually. “I think it’s the manner in which we win as well. We need to be convincing. We need to stamp our authority on games, and really show Joe, his coaching staff and probably the rest of Ireland that we’re here, we’re serious about this and we want to be counted seriously.”